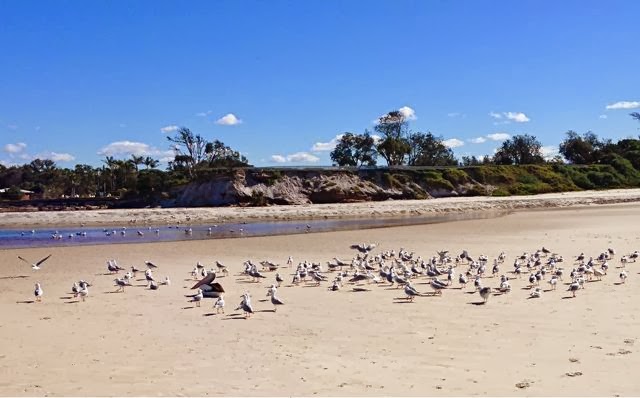 Being yourself – the art of being happy in your own skin.  A pelican amongst the gulls and terns at Belongil Estuary

I recently went to a show in Byron with Ruby Wax – the New York comedian who lives in London. She was talking about her new book ‘Sane New World’ – an account of her experiences of being born into a dysfunctional family, being diagnosed with depression after the birth of her third child, having lived with it for most of her life, and how she learned to deal with it.  She said she dealt with it by allowing herself to be diagnosed and then trying to understand it – she has just completed a course at Oxford University where she studied neural plasticity – how the brain works and suggests we can rewire it to help us function in a better way – it’s apparently not all in our DNA .

“A man’s as miserable as he thinks he is.” Seneca

She prefaced her talk, in the usual way, by having a dig at the Byron Bay audience – (apparently we are all hippy-trippy, crystal gazing, new agers – amongst other things).  She then proceeded to talk about how she turned her life around by learning about mindfulness – being in the moment and about how we should: realize that the acquisition of wealth and ‘stuff’ won’t give us peace and contentment,  stop and actually listen to our children,  not try to do twenty things at once and be aware of the here and now etc. etc.  It seemed to me that most of the audience were thinking the same as me “No wonder you’re depressed if you’ve only just worked that out”   Why did she think we have chosen to be HERE rather than THERE?

“For many men, the acquisition of wealth does not end their troubles, it only changes them.”Seneca 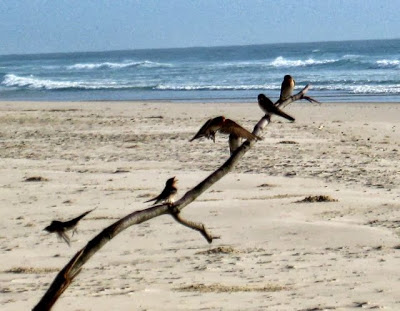 Welcome Swallows on the beach at New Brighton trying to teach us about fun, family and being playful

We all have difficult times in our life and there is not always a hand reaching out to stop us stumbling or pick us up when we fall, so we really have to learn ways of helping ourselves – for me that’s engaging with nature, being active (having a swim!) and finding the pleasure in small things, because sometimes I could easily just pull the covers over my head and try to blot out the difficult bits.  It’s at times like that I go back to Seneca – the Roman philosopher who lived over 2,000 years ago during the reign of Nero, who ended up forcing Seneca to take his own life when he fell out of favour (and we think our leaders can be self-serving, greedy nincompoops!).

I really got to know about Seneca from the marvelous series ‘The Consolations of Philosophy’, by modern-day philosopher Alain de Botton.  Seneca’s main message is that we are in charge of our own happiness and if the way we are running our life is making us unhappy – then change it.  Be brave – it will make you more resilient.

“There is no person so severely punished, as those who subject themselves to the whip of their own remorse.” Seneca

JUST A LITTLE STORY:  When I was growing up my mother was constantly on the latest fad diet – grapefruit, Pritikin, Weight Watchers, liquid dinners in a can, pills etc. etc.  The garage was also full of discarded ‘diet aids’ – a belted fat wobbler that you strapped around you, turned on and then fell in a heap of laughter (that burnt up a few calories – the fat wobbler did nothing!), special mats and rolling ‘things’ for doing stomach crunches, a medicine ball that nearly knocked her teeth out and the piece de la resistance ‘the scuba suit’ – as my father dubbed it.  This was a flesh-coloured, rubber corset with little holes all over it that my brother and I had to help her get zipped into – don’t ask!.  This was supposed to make her sweat, while running around the house with the vacuum cleaner, and bingo the pounds would drop off.  Of course, she didn’t loose an ounce.  The unzipping of this corset of torture was at least fun to watch – she looked like she was in the final stages of some fatal disease; bright pink and sweaty with little pimples all over her where her flesh had been forced through the rubber holes!
Mum thought there there was a magic answer to all of this.  What she didn’t want to do was CHANGE – eat less and exercise.

“As long as you live, keep learning how to live” Seneca 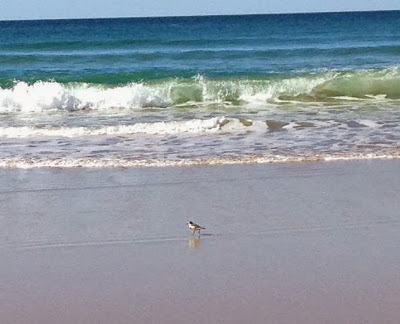 Mindfulness – a big lesson from a little tern
“He that does good to another does good also to himself.”Seneca
I hope you have somewhere to go when your mind is full – somewhere to empty it.  I go to the beach! 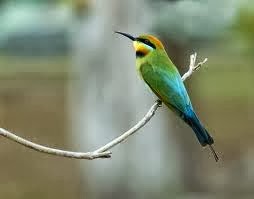 Rainbow bee eater
This flock of the most incredibly beautiful rainbow bee eaters had made their very tenuous homes at the high water mark at South Golden Beach, which will probably be eroded into the sea at the next storm or king tide (about ten metres of beach have been lost this year).  This nesting site was also only about 20 m away from the dog walking strip – I hope their owners are mindful.  It was going for this walk on the beach yesterday that made me want to share these beautiful creatures with you – simple pleasures – and Mr Seneca. 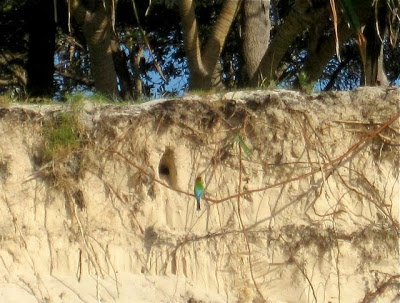 Rainbow Bee Eater at home, South Golden Beach, NSW
“Life’s like a play: it’s not the length, but the excellence of the acting that matters.”Seneca
*Lucius Seneca, philosopher, statesman, educator and dramatist 4BC-65AD 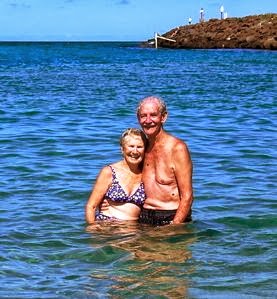 PS My mother was never fat, she just thought she was.  My parents aged in their 80’s.  Maybe swimming is in the DNA?