This is a recipe based on one that I picked up in one of the cooking classes that I took in Bali many years ago, with Janet de Neefe from Casa Luna Cooking School, and it has been a staple in my freezer ever since – usually at this time of year when the galangal is ready for harvesting.  You use the root rhizome – it looks like a large, pink ginger.  It’s best to use the young shoots that are still pink and choppable – as it gets older it gets woodier.   The aromatic leaves can also be used to wrap food before cooking on the barbecue – especially fish.

NOTE August 2017.  I originally wrote this post in 2012 – and there I was again last night, cooking up prawns on betel leaves with some of this yummy paste that I had in the freezer – not the same batch from 2012!

1.  One tablespoon of the galangal paste is great mixed with pumpkin/sweet potato/cauliflower with some coconut cream added for an instant curry VEGETARIAN CURRY.  Made even more delicious with a handful of toasted cashew nuts and some chopped fresh coriander.

2.  One of my favourites ways to use this paste though is with fresh prawns or a nice piece of fresh, fleshy white fish to make a simple curry.  For this I just flash fry the fish/prawns with extra garlic, fresh chilli and add one tablespoon galangal paste with a small can of coconut cream.  A little extra salt and a few fresh kaffir lime leaves and it’s done in about 10 minutes.

4.  Betel leaf grows easily around here and a spoonful of galangal paste added to some stir-fried prawns and topped with chopped peanuts or toasted coconut, coriander, chilli and lime juice make a great appetizer.

5.  Last night I made a green papaya salad from the garden, made even more delicious with  a side dish of some stir fried prawns, a spoonful of galangal paste (that I keep in the freezer) and some coconut milk. (July 19th 2017)


GALANGAL PASTE   The root of the galangal plant is used for recipes like this – the pink rhizome in the photo below.  It’s a bit of a mission to dig it up, so when I do I make sure I dry some for later by simply slicing it up and drying it out on a tray in the sun, then storing it in an airtight container in the pantry.  Dried galangal like this is used extensively in Thai and Malaysian recipes – particularly soups like LAKSA. (Slicing!! – special blade on the food processor folks or the trusty mandolin – the one with the blade not strings – you’d never do it with a knife unless it is very young and tender) 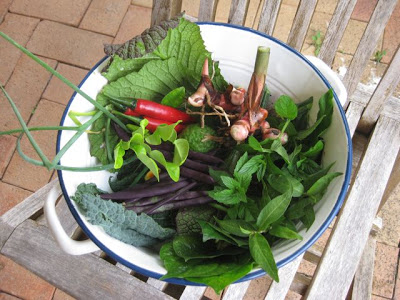 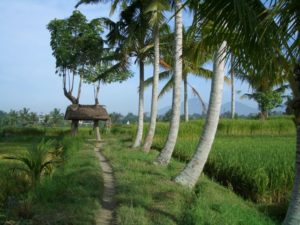 And, just because we can, just a little walk in the rice fields around Ubud with the mountains of Batur and Agung in the distance.