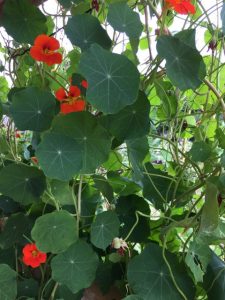 I love capers in pasta, salads and sauces but, I don’t like the fact that they are quite expensive and imported – I prefer to buy local whenever I can.

Capers are the buds of the caper bush (caper-berries are the fruit) and grows readily in Mediterranean countries – mostly out of rock walls.  It has a very pretty flower, but you hardly ever find a plant with lots of buds and flowers as they are scavenged by the locals and pickled in brine at home – it’s a fairly laborious process. 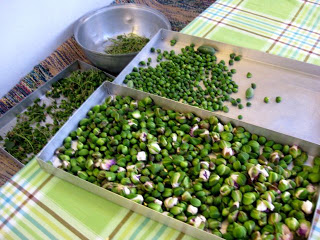 Jobs to do before the taverna opens.  Freshly picked caper buds being sorted outside a taverna in Sifnos, Greece

They say that necessity is the mother of invention so I was very happy to come across this recipe for ‘false capers’ in a book of early Australian cooking that is over 150 years old.  They don’t taste like capers – they taste like pickled nasturtium seeds, but they are surprisingly good and are a fantastic substitute. 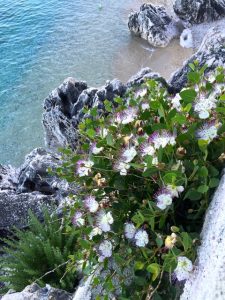 The very pretty caper bush, growing where it is happiest – out of the rocks of a coastal cliff in the Mediterranean.  In this case on the island of Corfu  Below it, the green feathery plant is rock samphire – another wild food that is a highly desirable part of Greek cuisine, particularly in the springtime when it is served pickled as a side dish to fish and drunk with icy cold ouzo.  Now to our substitute – pickled nasturtium seeds.
How to process the nasturtium seeds for pickling. After the blossom falls off, pick the half-ripened (still green) nasturtium seeds. Drop them in a boiled, strained and cooled mixture of the following pickling mixture.
500ml white wine vinegar
2 teaspoons sea salt
1 medium onion, thinly sliced
1 clove garlic, smashed
10 peppercorns
1/2 teaspoon fennel/dill seed 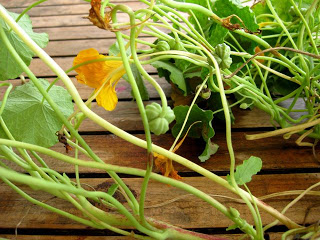 Nasturtium seeds – just ripe for pickling!
Simmer ingredients together in saucepan, cool and strain into sealable jar.  Add nasturtium seeds.  They will be ready to eat in a couple of weeks or so and will keep in the fridge for up to a year. They are ready to eat when they sink into the liquid. You can keep adding to the liquid pickle mix as you pick the seeds – how easy is that?
Nasturtium – Trapoleum majus.  This is one of those common garden plants that tends to get overlooked, but I love it because it has so many uses and is incredibly easy to grow and manage.
It’s name comes from the Latin nasus tortus ‘twisted nose’ which is the effect it’s pepperiness has on your nose when you eat it or crush it underfoot – are you beginning to love it?
Here are some of its uses:

Groundcover:  As a colourful creeping, flowering carpet that gives a soft ‘cottage garden’ look.  Nasturtium grows well in the sub-tropics and does best through the cooler months and in semi-shade.  It prefers sandy soils, but is adaptable to most soil types – in fact, the poorer the soil the more flowers you get. Their vibrant, sunny colours make it a lovely cut flower.

Living Mulch:  Useful as a ‘filler’ plant in tricky areas – like steep banks and around fruit trees to prevent weed invasion/erosion/drying out.  Once you plant it, you never have to do so again as it seeds and re-grows freely but, it is not invasive and easy to pull out.  Any plants in unwanted spots just go straight in the compost.

Food:  Every part of this plant is edible!!  Young leaves are used in salads and contain high amounts of Vitamin C (older leaves become too peppery) – I like to use them on sandwiches – they fit well.  Flowers can be eaten whole or as an addition to a mesclun salad.  An old gardener once told me that he ate a Nasturtium flower every day as a natural antibiotic.  (He is the same one that told me that lavender oil kept ticks away – and he was right about that).

Companion Plant:  Nasturtiums are a great plant to use around vegetables.  The strong smell acts as a deterrent.  As a decoy/sacrificial plant that will attract white fly and keep them away from your vegies.  It also attracts hoverflies-one of those beneficial insects in the garden – this one gobbles up aphids. 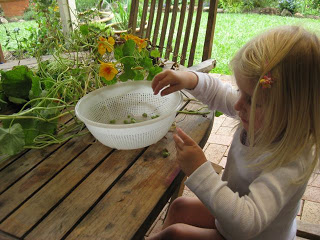 A LITTLE STORY:  I have eight grandchildren and bless the day that J.K. Rowling wrote the Harry Potter series –  she is responsible for turning the older ones, and millions of other children on to reading.  My lot often suddenly appear from the bushes in my garden, with cloaks flying and wands waving shouting Latin spells at each other. As their grandma is the resident garden witch,  they naturally come to me for new spells.  This is where the good old nasturtium comes in. As I have mentioned, its name come from the Latin nasus (nose) tortus (to twist) for the peppery smell that comes up when you tread on it – and a twisted nose is a fabulous spell to cast on anyone, don’t you think?