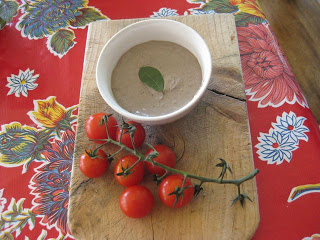 Being mostly a vegetarian I am always concerned about getting enough iron and B12 and with lots of busy young women around me – I am particularly concerned for them as stress and tiredness come hand in hand with their very full lives.  This pate seems to be a natural pick-me-up and everyone tells me they feel better after they have eaten it  You may have tried the French pate de foie gras from a can but it has nothing like the taste and texture of this freshly made version (although this is duck and not goose it has a very authentic flavour).

When I do eat meat though I have to know where it has come from and only eat ‘organic’.  In a previous life I worked in medical research and, as a very young woman, worked for surgeons and specialists in many different fields.  I remember asking one physician if there was anything he wouldn’t eat and he said “Yes, liver because it is the cesspit of the body.  I would only eat it if I had grown the animal myself or knew exactly where it had come from”.  I took this on board and never ate liver again unless it was organic although it was common dish for me growing up – lambs fry and bacon anyone?

I came from a family though who ate ‘nose to tail’ in a way that is suddenly fashionable again – for them, in post-war Britain on a very small income, it was a matter of necessity.  All of this is kind of in the blood for me – so to speak.  My maternal grandmother started her very successful catering/hospitality career by opening a ‘cooked meats’ shop in the front window of her terraced house in Birmingham when her husband became an invalid (he had an accident on his penny-farthing bicycle – or so the story goes!) and she had three children to bring up.  Black pudding and faggots were her speciality (Google them!).

My mother loved pigs trotters with split peas and my father brawn (a kind of pressed meat) made from a whole pigs head which he used to saw in half and then boil with herbs and spices (the eyes and teeth were truly gruesome and fortunately omitted from the finished dish). After being sawn in half the brains were reserved for breakfast, quickly sauteed in butter and served on toast – delicious.  My father was a policeman in the City of London and the meat market was on his beat and lots of ‘bargains’ thankfully came his way – the whole pigs head banged it’s way home in a muslin bag tied to the handlebars of his bicycle.  Other regular appearances in out diet were stuffed sheep hearts, kidneys, tripe, giblet soup, oxtail and tongue, sweetbreads and all kinds of brains.  None of which gets a regular appearance on modern family menus.

So, when I noticed that our local organic butcher had some duck livers I remembered this pate based on an Elizabeth David recipe. ( I think he must have sold out by now as three friends who have tried this recipe have already been down there to get some livers and make their own).
NOTE: You can also use organic chicken livers just omit the juniper berries and add a few thyme leaves instead

Serve with bread and some date and tamarind chutney (to be posted later!) and let me know what you think.

NOTE:  My education in food and international cuisine has been relatively recent and I kept reading, in particular, about two foods and how wonderful they were – truffles and foie gras.
(My first truffle experience I will save for another time.)

So there I was in Paris about six years ago, in a bistro off Avenue Bosquet in full view of the Eiffel Tower, and I saw foie gras on the menu.  Now, in my ignorance I thought I was ordering pate de foie gras – the only kind of goose liver I had eaten up till then and didn’t realize that you could eat a hot (well, warm) whole one.  I was impressed that it was coming with a wild leaf salad and caramelized apples, seared in a little cognac and butter.  And then the plate arrived, and I suddenly realized that what I had ordered was the whole goose liver – and then I tasted it.  The traffic stopped, the choir sang and tears of extra special yumminess sprang to my eyes.  It was definitely one of those fantastic food moments that don’t come along too often.  Maybe it was Paris, maybe the cold glass of chablis, maybe my husband in his new Parisian shirt – whatever, the magic worked.  Bon appetit!