Unbelievably the phrase ‘share and share alike’ first appeared in Daniel Defoe’s Robinson Crusoe in 1719, but came to mind just recently as a way of expressing what happens among people who grow their own food – THEY SHARE.  No money changes hands.  The only thing the giver expects is the joy of giving.  Pleasure is received from produce grown by your own hands and passed on.  It’s kind of the way I grew up in London in the 50’s and certainly what I am experiencing again in a small rural community in Australia in 2012.

Every month I run a workshop in my garden where I focus on seasonal organic gardening and then HOW YOU EAT IT what you have grown! On the morning of our monthly Garden Group last week I found myself unexpectedly showered with homegrown abundance:  lemons from Megan, bananas ginger and chillies from Grant, a beautiful jar of pickled cucumbers from Chris, a pumpkin from Alison and camellias from everyones garden.

From this, later in the day, I made a spicy pumpkin soup – I gave some of this to my neighbour and in return she gave me some lemon pickle – the local produce cycle.

What has happened during this whole process of giving and receiving?  Heart and hand have been engaged AND NO MONEY HAS CHANGED HANDS.

I used to visit and revisit it a dozen times a day, and stand in deep contemplation over my vegetable progeny with a love that nobody could share or conceive of who had never taken part in the process of creation.  It was one of the most bewitching sights in the world to observe a hill of beans thrusting aside the soil, or rows of early peas just peeping forth sufficiently to trace a line of delicate green.  ~Nathaniel Hawthorne, Mosses from and Old Manse , 1846 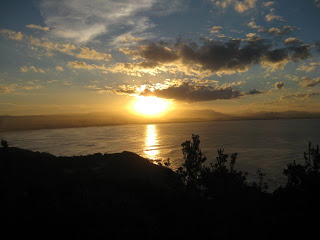 A lot of giving, that I have experienced in my life, has been associated with obligated reciprocity or indebtedness – something was definitely expected in return.  Gardeners are not like that.  They are all together a pretty equilibrious bunch – there’s a certain generosity of heart that is very refreshing – nothing, except a smile is expected in return. It’s one of the reasons why gardening, and the whole garden fraternity is so nurturing.

There can be no other occupation like gardening in which, if you were to creep up behind someone at their work, you would find them smiling.  ~Mirabel Osler 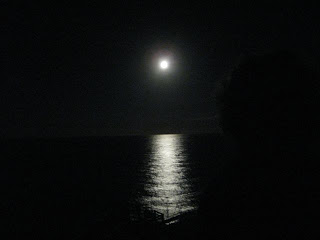 We live on the most easterly point of Australia, Byron Bay, and last Sunday was full moon with two minutes separating the sun setting and rising.  A picnic at the lighthouse with friends was a great way to  celebrate and be grateful.

THE WAY FORWARD:  Back to the Future? 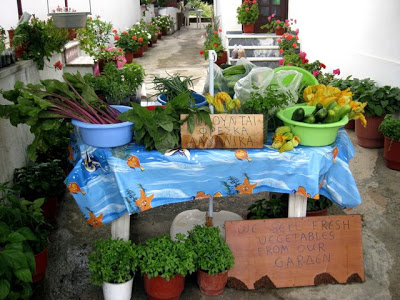 “You Have to go backwards to figure out how to go Forwards”Katya Larisaiou
Poor Greece, it’s now three days since the latest election with no government, a massive debt crisis and all seems doom and gloom.  But, I came across an article in the UK Telegraph that gave me hope.  “Bartering Greeks begin austerity Marathon”

It appears that in the town of Volos 320 kilometres north of Athens, the Greeks are taking matters into their own hands in ways that involve reversion to the past.

The locals have implemented a bartering and exchange scheme that eliminates the shaky Euro.  Farmers are avoiding the large supermarkets and selling directly to customers at substantial discounts.  People are selling dried wild herbs picked from the mountainside and roadside produce stalls have sprung up everywhere.

Rather than wait for the politicians to improve their lot, these Greeks are taking the future into their own hands that looks to the past for answers.

In addition many Athenians, now out of work or on short time (22 per cent unemployment and 52 per cent youth unemployment) have decided to head back to their ancestral villages to rediscover the virtues of village life.

“Villages are the future for the Greeks.  You can maintain an acceptable standard of life and Greek nature is fantastic.  We have to get back to simple things”(Katya Larisaio 35) Katya has just returned to Volos after 10 years in Athens, opened a small cafe and joined the local alternative currency scheme that allows members to exchange goods and services. And a quote from Theodoros Mitropoulos a carpenter who lost his job in Athens and has returned to his family village in the Peloponnese “We have land for animals and growing vegetables, I can use some and sell some.  Village life is less expensive, people share things” Sound familiar? 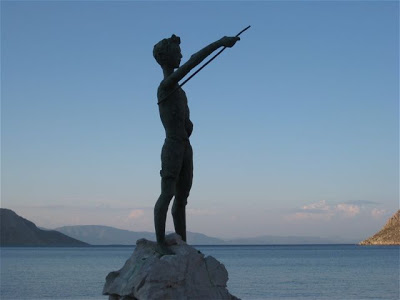 Michelaki, the little fisherman of Symi pointing the way forward

“A society grows great when old men plant trees whose shade they know they shall never sit in.”  Greek proverb