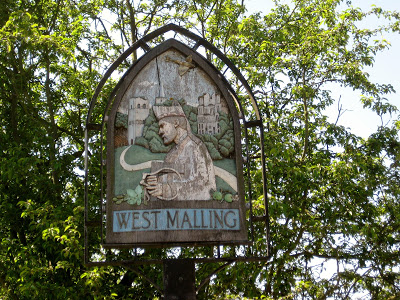 We recently had a long battle in our little town on Mullumbimby to keep the industrial food giant, Woolworths, from building a large supermarket there.  We lost.  What we were afraid of has come to pass in the Kentish village where some of my remaining English family live.

I am staying in the village of East Malling, Kent, though there is not much of the village life left – just a pub, the King and Queen which dates from Tudor times, and a church.  It’s mostly now a traffic snarl for cars doing a rat run to get on the M25 in and out of London.

West Malling is three miles away and has been a large market town for nearly a thousand years.  It was founded in 1090 by the chap in the village sign above, Bishop Gundulph, who started a centre for Benedictine nuns under control of an Abbess.  Under charter from the Abbess it became a centre of rich agriculture which brought markets, fairs, shops and people. It was only the shenanigans of HenryVIII that brought about the dissolution of the monasteries and the demise of the Abbey after 500 years.  Early in the 20th century the priory was revived and still operates today – alas, not the services of a market town. 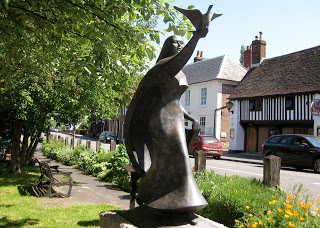 The history of West Malling is depicted on the back of this wonderful statue in the middle of the High Street.  It’s called ‘Hope’ by Sarah Cunnington.

Hope is about the only thing left for the survival of this beautiful old village because what the Black Death, Reformation and a thousand years of history has not managed to do TESCO’S HAS.  This once thriving centre for fresh food has been extinguished by this one supermarket that operates in the centre of town.  West Malling does not now have one remaining food shop within miles.  Everybody shops at Tesco’s.  The market square, in the centre of town, is now just used for the Tesco trucks.  Their is neither greengrocer, baker, butcher or fishmonger.

During the Black Death, in 1348, only 15 people in West Malling survived and the first game of cricket was played here in 1704.  The uprising against Mary Tudor was put down here by troops from West Malling – it has a long and rich history. 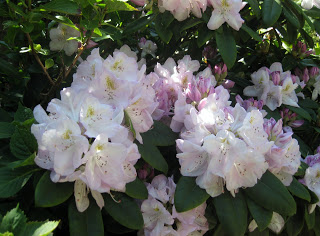 On a brighter note.  West Malling had an ‘open garden’ day yesterday and I had a happy afternoon cycling around the eight gardens on show.  I started off in a Georgian Villa with the brass name plate of ‘Lucknow’ on the front door –  I can just imagine some old colonel returning from India to retire to a place like this.  It’s courtyard garden was packed full of typical English cottage garden plants and this beautiful rhododendron. 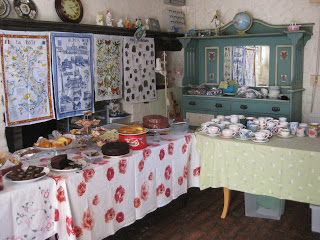 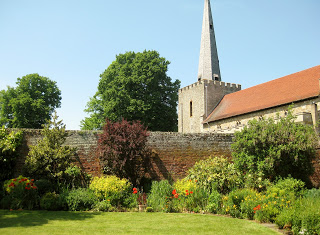 Bourne House, next to the old Church of St Mary’s dating from 1670,  was my pick for the day with  its’  design formula from that pioneered by Vita Sackville West and Gertrude Jekyll in the 1920’s – formal design with informal planting – termed English Revival and still popular in garden design – it’s how my gardens usually end up. They also turned on a top afternoon tea! 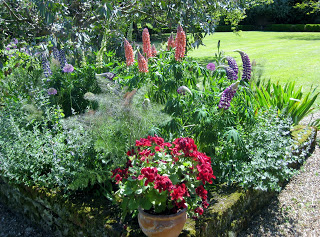 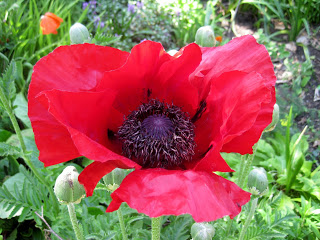 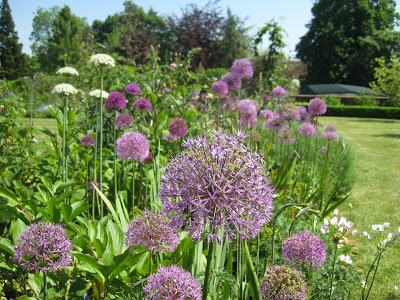 Alliums have also become very popular as perennial bedding plants.  They are a large group of plants in the onion family with wonderful globular flower heads – we can grow these!  They come in various heights with white, blue and all shades of mauve flowers.
West Malling is in the Heart of Kent with its centuries old apple and pear orchards and red brick oast houses – for these fields were once full of hops used to make beer and the conical, red brick, oast houses used to dry them.  My father was born in the East End of London and their annual summer holiday, going back generations, was to come down to Kent, with the whole extended family, and pick hops and feast on the local abundant produce – all long gone.  Instead most of the food comes in trucks along the M25 from European ports and far away African and South American growers.
Britain now has a secure fresh food supply of about three days.  This was starkly brought to everyone’s attention when a volcano in Iceland decided to blow its top and the ensuing ash cloud prevented air transport in and out of Britain.  Have we become smarter – I don’t think so.