The food security of everyone on the planet is totally reliant on a few things that often get totally taken for granted by those that control the production of food; healthy soil, water, sunshine and especially the unseen work of myriads of pollinators.

What has been noticeable to everyone in Britain, during an unseasonal week of warm weather, is that where this would once have set the place abuzzing the gardens, fields and hedgerows were remarkably quiet and the daily papers were full of alarmist letters noting the decline in butterfly, bee and other insect numbers – our pollinators.  Where gardens should have been humming they were now silent.  Rachel Carson’s predictions from the 1960’s in her book Silent Spring seem to have come true.

The consensus of opinion, from expert correspondents, was that the use of pesticides were to blame and particularly the neonicotinoids – a systemic synthesized pesticide based on the insecticidal properties of nicotine. ( See previous post Organic Gardening – Why Pesticides are Harmful).

“Moralists (archbishops included) can thunder away as much as they like; but they’ll make no difference unless and until people see that there is something transforming and exhilarating about the prospect of a whole community rejoicing together – being glad of each other’s happiness and safety. This alone is what will save us from the traps of ludicrous financial greed, of environmental recklessness, of collective fear of strangers and collective contempt for the unsuccessful and marginal – and many more things that we see far too much of, around us and within us.”Archbishop of Canterbury – part of his Jubilee address. (See previous posts Economics of happiness 1 and 2)

NOTE: So rare now is the sight of a butterfly that I was stunned to see mechanised plastic butterflies spinning round and round in a garden I visited – is this a sign of the future?

“Natures’ Companion Planting” – this was my husband’s comment, while out on another ramble and negotiating our way through a large bank of stinging nettles with the antidote, dock, growing right next to it.  If you get stung, you simply break off a dock leaf and rub it on.

While the hedgerows may be quieter than usual they are certainly bursting with plant diversity and colour; white and pink campion, buttercups, daisies, forget-me-nots, Queen Anne’s lace, poppies, hawthorn, elderberry, wild roses, hazel, etc.  Many hundred of miles of hedgerows were ripped out in the 1950’s to make way for larger monocultured fields and the machinery needed to maintain them.  The vital role these ecosystems played was extremely undervalued, but fortunately this is now being recognised and many of them are being replanted (thanks, in no small part, to the lobbying of Prince Charles).

“As we continue to destroy biodiversity, it’s possible we are destroying the machinery that supports us”  Simon Barnes, Environmental Journalist, The Times, June 9th 2012

NOTE:  My Mother remembers, during the Second World War when fruit was scarce, people being employed to go out picking rose hips from the hedgerows to make a syrup rich in Vitamin C that was sent to the troops and given to young children.  And I certainly remember in the 1950’s having excursions into the countryside to go ‘black-berrying’ in the hedgerows and picking baskets of elderberries for my Dad’s homemade wine.

My parents live next to a chestnut wood on the Stour river in Suffolk.  Walking through the wildflowers there was amazing with violets, orchids and Miss Marpel’s poisoners’ favourite- hemlock.  I think that having this ‘unsprayed’ botanical cornucopia backing on to their garden may be the reason why they did have some bees flitting around and certainly lots of birds – including a song thrush and woodpeckers. 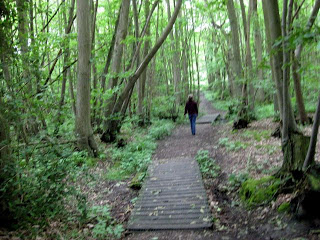 Everywhere you walk in Britain you are treading on history.  This ancient wood was planted by the Romans about two thousand years ago.  A days march away (about 20 miles) is Colchester – one of their main settlements – and woods like these are scattered around Britain to provide shelter, fuel and food for the marching soldiers and settlers.  A great advantage of trees like these is that you can coppice them- that is – cut them down to the base and they will re-shoot long, straight branches (like many eucalypts).  Phil, my brother-in-law’s friend is still employed as a woodsmen in a Kent chestnut wood, cutting the timber for poles and fencing. ( It was once used for the Kentish hop-poles).

NOTE: These are the Spanish Chestnut Castanea saliva native to North America and Europe and not the other chestnut that has conkers.

NOTE: I often get the feeling, when I am walking through these woods, that a troop of Monty Pythonesque Roman soldiers are going to come clunking along the muddy path with Eric Idle muttering “not bloody chestnuts for dinner again!” and the rest of them singing “Always look on the bright side of life”. 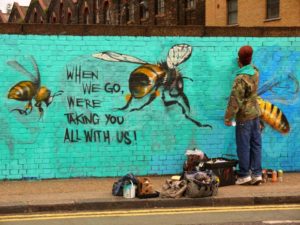