February in Mullumbimby – The Big Wet 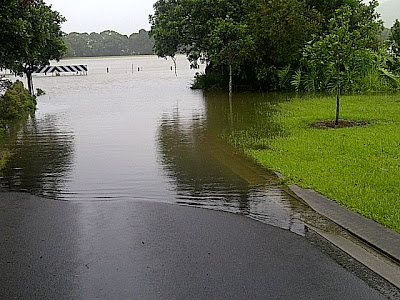 The end of our road after tropical cyclone Oswald – behind the fence is usually a paddock with cows in it.  This was three weeks ago.  Our local rivers have had 14 flood warnings since the start of 2013.

I was in Sydney when Oswald paid us a visit, but today we had another tremendous storm – one of the most ferocious I have ever experienced.  The winds have abated now but it is still raining.  I have just seen my son-in-law off, after having dinner here, with the three grandchildren wondering if they will get home OK – my daughter has gone to Melbourne with her girlfriends for the weekend ( they have bushfires down there with very dry hot winds!).  He already had to try three different ways to get here through flash floods and fallen trees across the roads.

Why risk it, you might ask? Well, once again they have no power at home – which means no water (they need a pump from the tank) and great difficulty getting dinner.  There are beds here if they can’t get home, but they are also worried about their chickens and guinea pigs. 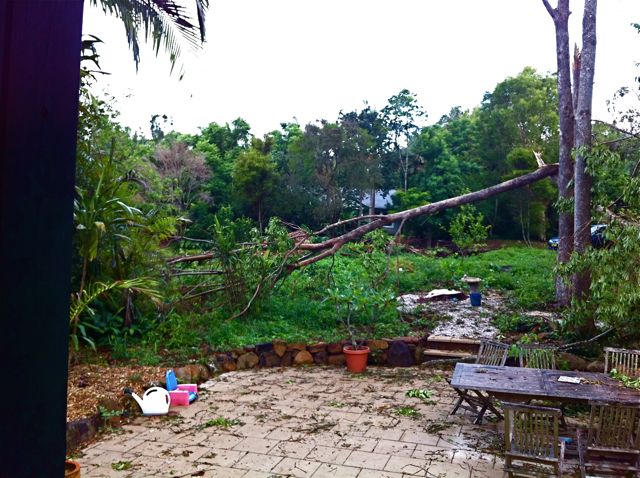 My daughter’s place after the cyclone.  They lost a large Tallowood tree which left a drenched koala stranded on one branch – it eventually recovered and moved on – with another huge eucalypt down over their concrete water tank, fortunately not cracking it.  My husband tried to get up there to check on things, in vain as it turned out – water was over the road in several places –  he just ended up helping people clear fallen trees from the road and directing a carful of terrified Japanese tourists? (Less than perfect GPS again?)

This destructive weather causes so many problems for everyone around here.  The local community of Upper Repentance Creek, with about 40 families, are still isolated after four weeks because of a road slip – they have supplies flown in three times a week.

Many other families were without power or telephone for up to 10 days.  Imagine life for most people without their iPhones, television, refrigeration and internet connection for one day, let alone over a week?  As my friend Don says, who lives way up at Huonbrook and is one of the folk always affected by wild weather, it’s good practice for the future.

You become resourceful – you have to; bucket showers, candlelit dinners, eating from the larder, lots of board games (I reckon the Byron Shire residents must be the Scrabble champions of the world by now) and community co-operation – we couldn’t exist without it – I also think the maternity unit at the local hospital might also be very busy in nine months time?  My daughter, and her family, were away on holiday during the cyclone and couldn’t get home because the highway was flooded.  Their neighbours rescued the guinea pigs and chickens, checked the house for any damage (thankfully none), saved their food out of the freezer and had chain-sawed up most of the fallen trees by the time they got home.

And on Friday, the day of the latest storm, we had another intense low pressure system off the coast with onshore wind gusts of up to 100km per hour with a massive dumping of rain – 127mm in 12 hours.  At midday it was falling at 720mm per hour – sheets and sheets of water.  I sat inside as the lights flickered watching my garden being lashed and shredded to pieces.  I woke up this morning to the sound of chain saws as folk begin the big mop up with trees down everywhere though, when I stepped out onto the lawn, water came up over the top of my boots – the ground is so sodden it is just not draining away.  It’ll ruin the lawn if we start walking on it now. 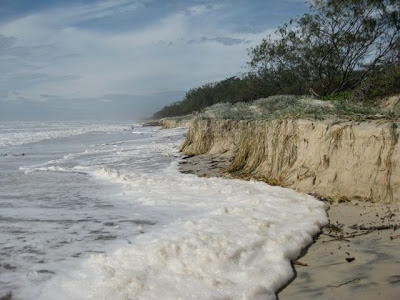 I did venture down to Brunswick Beach for a walk and this is what I found – no beach!  The very high winds and mountainous seas had simply swept it away. 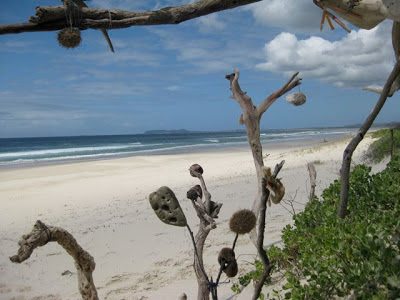 What it normally looks like!
My vegie garden is a disaster with bean plants uprooted and splattered against the chicken wire, eggplant and okra blown out of the ground and just about everything else wilted and waterlogged.  My datura, which was flowering beautifully, now looks like a tree of shredded hankies and a large frangipani in a pot was blown over, cracking the pot a making an amputated mess of the plant.  Fortunately, my son is an arborist and I have a huge pile of mulch out the front just waiting for it to dry up a bit – he dumped that there after the cyclone.  If you want some tips on fixing your soil after the rain – go to this link
I’m sure he will have lots more.  If you need any you can contact Nick Hart on 0427 347 380. 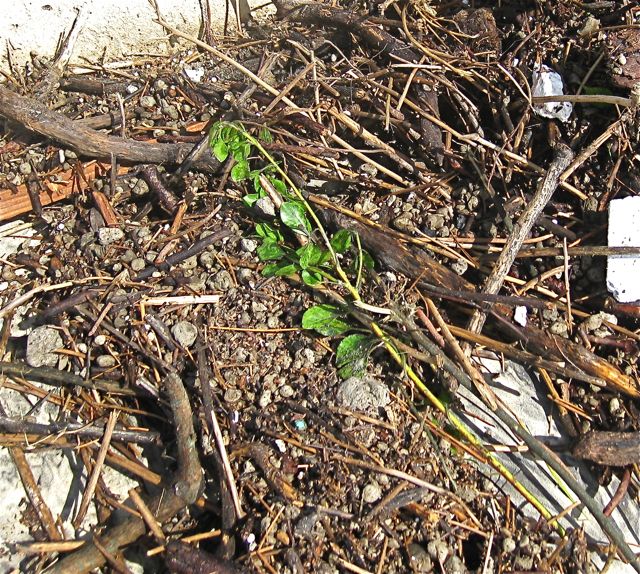 Storm rubbish on the beach – always disquieting is to see so much plastic, large, medium and minute pieces of plastic.  Friends and I went down after the cyclone and picked up bags and bags of plastic waste – straws, bottle tops, plastic bags, fishing tackle and lots and lots of polystyrene – the stuff that is causing a large area of the Pacific to become a toxic soup.  Looks like we will be busy again!
Interestingly, the little grey stony pieces always appear washed up on our east coast beaches after seismic activity in the Pacific – it’s debris from a volcano – pummice.  The beach was recently strewn with this, and coconuts, after an earthquake and tsunami in the Solomon Islands.  Wild weather indeed.

“This island continent lies in the water hemisphere.  On the eastern coast, the neighbouring nation is Chile, though it is far, far east, Valparaiso being more than six thousand miles away in a straight line: her northern neighbours are those of the Timor Sea, The Yellow Sea; to the south is that cold, stormy sea full of earth-wide rollers, which stretches from there without land, south to the Pole”.   For Love Alone, Christina Stead, 1945