Lulu’s Cafe – the Heart of Mullumbimby

I was going to write this last November about my favourite cafe in Mullumbimby – to showcase them before the Mullumbimby Music Festival but, for reasons that will become apparent, it didn’t happen.

I have been going to Lulu’s Cafe in the Dalley Street arcade for the past seven years.  It’s my refuge in the mornings for coffee, something delicious to eat, a read of the paper but, more importantly, a catch up with my community.

Lulu’s is like the village square.  Somewhere where the women in traditional villages would go in the morning to buy bread and collect water at the pump – and the guys would go well, just to be guys, have a coffee a yarn and a smoke.  Lulu’s is like that – but more –  it has the best vegetarian food in town.  Food made with heart and soul – food made with love that you can taste.

This comes from the dedication of the owners,  Linda Rutledge and Peter McNeilly – a committed couple and chefs who have been at the helm of Lulu’s for the past 13 years.  They moved to the area in 1990 from Sydney but our paths probably crossed at Ryde TAFE in the 1980’s when they were there studying cooking and I was studying horticulture (hanging out at the cheap hospitality kitchen at Ryde was a way of life for hort. students – we were always starving and poor!) 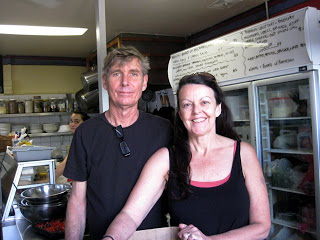 Peter and Linda, in the kitchen October 2012

Linda and Peter have an ethos that could well be emulated by other restaurants and cafes but unfortunately rarely happens; they recycle as much as possible – composting all the organic waste from the cafe, (they only put out one small wheelie bin per week of waste) and, as much as possible, they buy organic fresh local produce – their flours, beans, eggs, coffee, nuts (and more) are also all organic.
They use local cooks for supplying pakoras/samosas, croissants and cakes and Sol bakers for their organic breads – and they use washable cloth napkins. 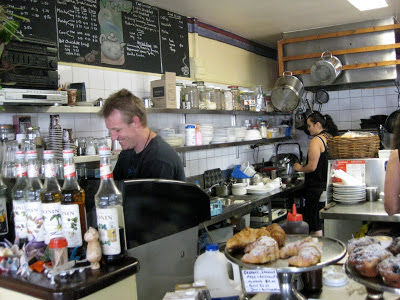 Jerry, the barista doing his best to get everyone’s coffee right – not easy!

Linda and Peter have always been very supportive of the local community through local arts, drama, sport and music as well as regularly showcasing local musicians at the cafe on Saturday mornings (in another life Linda would have been an actress/singer and Peter a cricketer – what’s the score Pete?). And, everyone is welcome at Lulu’s – the lost and found, rich and poor, kiddies and old folk and even the blow-in’s who were looking for a bacon and sausage fry-up – there’s something on Lulu’s menu to satisfy everyone.


Late last year Peter was diagnosed with cancer and they are now faced with a very difficult journey, consequently his quiet demeanour and cheery grin have been absent from Linda’s side in Lulu’s kitchen for a while now.

The heart of this community was expressed a couple a Saturday’s ago when it came together for a fundraising night to say thank you to them both for what they have put in over the years and, in particular, to pay tribute to Peter.  Any night is guaranteed to be fun if local comedian Many Nolan is MC’ing it and it wasn’t long before everyone was doubled over with laughter and then up dancing to the many acts that have played over the years at Lulu’s.  Being part of a vibrant, loving and welcoming community is at the heart and soul of happiness and, as Mandy said on the night -” it’s what Mullumbimby (and Lulu’s) is all about and I don’t think this would be happening in the suburbs of Sydney?”  Some money was raised for Peter and Linda but just as importantly the community was expressing their gratitude – saying thank you. 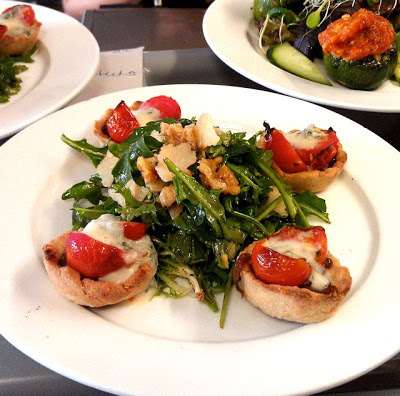 1.  Rub flour and butter together to achieve breadcrumb like consistency.
NOTE: Pastry can be made in food processor
2.  Mix in parmesan and salt
3.  Add a splash of water to moisten.
4.  Mix until pastry forms a ball – don’t overwork
5.  Rest in the refrigerator for half an hour.
6.  Roll our walnut sized pieces on a floured board –  into rounds large enough for tartlet mould.
7.  Bake in moderate oven (180oC) for 10-15 minutes until golden
8.  Fill with a teaspoon of caramelized onion, a single cherry tomato (halved) and a generous chunk of gorgonzola.
9.  Heat under a grill until cheese has melted.
Serve with a simple rocket and shaved parmesan salad tossed in a little oil and balsamic vinegar
NOTE: You can put any savoury filling in these tart cases.  I have also had them at Lulu’s grilled with fresh fig and goats cheese – delicious.

(I tried to chat Peter up once but he was on to me – he knew I just wanted his muffin recipe!)

August 12th 2013.  Linda has started a wonderful initiative at Lu’Lu’s – following on from the Italian model of ‘suspended coffees’.  Patrons at Lu’lu’s can forward buy a coffee, juice or vegie burger in advance for those in the community who can’t afford one themselves.