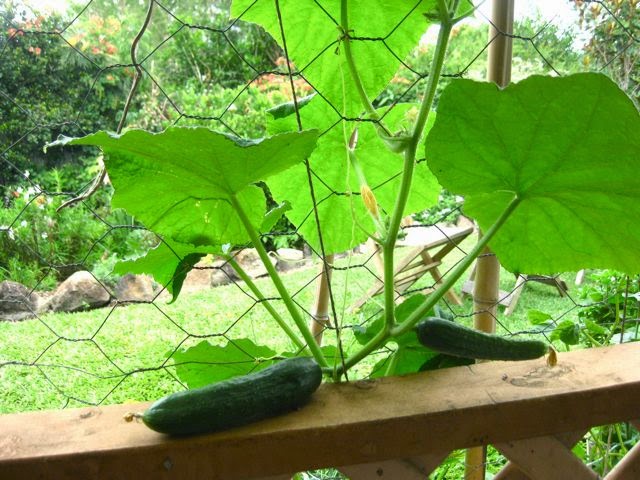 These pickles are sometimes referred to as bread and butter cucumbers, probably because they fit neatly in a sandwich and go with lots of sandwichy type things like; cheeses, cured meats, ham, pate’, terrine and roast chicken.  In fact, they are a very handy thing to have a jar of in your fridge.  Oh, and did I say that these pickles are really easy and cheap to make?

Cucumbers are part of the important food family CUCURBITACEAE – along with; melons, squashes, pumpkins, zucchini and gourds that grow through the summer months on scrambling vines.

This years’ dry summer has brought a bumper crop of cucumbers, but the recent humidity has brought the ubiquitous fungal problems – common to this whole family (see previous post on controlling fungal diseases with milk) and it was time to harvest what I had left and make some jars of pickles.  I always grow a kind of Lebanese cucumber because they are so crunchy and sweet with a non-bitter skin – you can happily eat the whole thing. 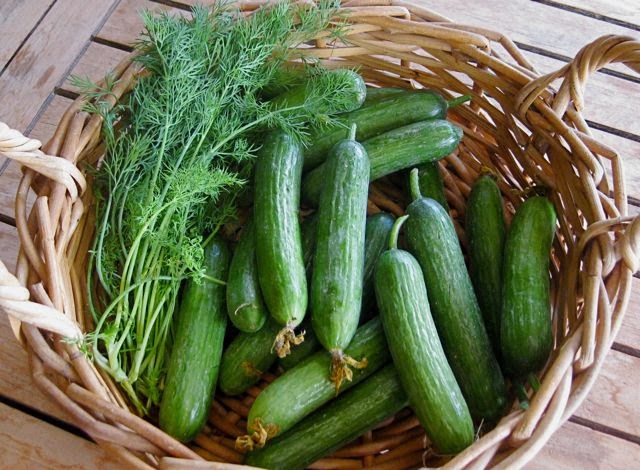 Recipe
12 fresh, small cucumbers (about 2kg)
2 tbsp salt
1 small brown onion, sliced very thinly (I do this on a mandolin)
1 tsp black peppercorns
Small bunch fresh dill
1 tsp dill seeds
2 tbsp white sugar
2-3 cups water
11/2 cups white wine vinegar
Method
1. Sterilize the jars you are going to use
2. In a non-reactive saucepan, heat together sugar, 1 tbsp salt, vinegar and water.  When dissolved, turn off heat and leave to cool.
3. Thinly slice the cucumber, discarding both ends. Place them in a colander with the sliced onion and sprinkle with the remaining 1 tablespoon of salt.  Leave for about 40 minutes.
NOTE:  Salting the cucumbers in this way draws out some of the moisture so that they remain crunchy when pickled. 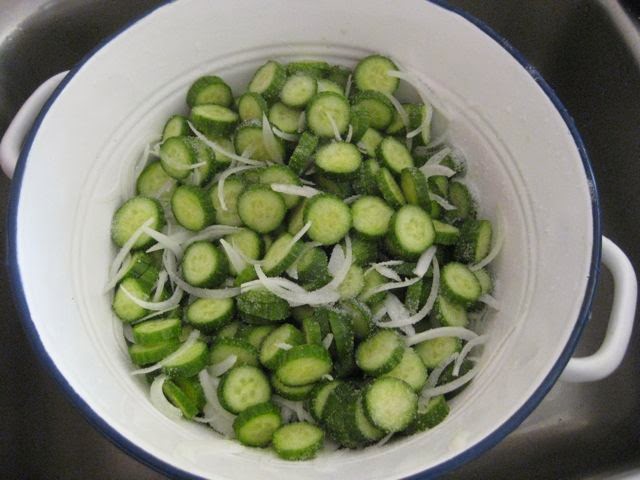 4. Wash the cucumbers under a running tap and dry, as best you can, on a clean tea towel.  Give the fresh dill a rinse too.
5. Pack the cucumbers firmly into your jars, together with the onion, fresh dill, dill seeds and peppercorns.
6. Pour the cooled vinegar mixture over the cucumbers until they are covered.  Give the jars a couple of bangs on the bench-top to get all the air bubbles to the surface.  Seal them tightly with a lid and leave for at least three weeks for them to cure. 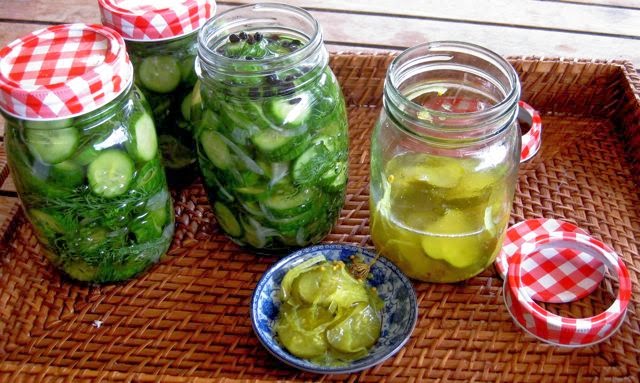 Some jars of freshly made pickle and an almost finished jar that has been curing for a while.  They will turn from green to this ‘cucumber pickle colour’.