This madcap idea was dreamt up by my husband as a circuitous way to get me back to Greece.  It went something like this.  “I know you don’t like flying from Gatwick or Heathrow, well Stanstead flies to Innsbruck and from there we can cycle to Verona, take a train to Milan, fly to Athens and get the ferry back to Sifnos – how does that sound?”.  Somehow I said yes, but alarm bells should have been ringing when I saw that the chap we were dealing with at Freedom Treks (the cycling company) was called Andrew Bracegirdle – I’m still wearing one two months later.

This 220km was embarked upon in almost total ignorance and no lycra. The company provided the bikes and maps, booked us into 3-4 star hotels en route and carted the bags every day – how bad could it be – and, “it was all downhill” “level 1” (the easiest)? 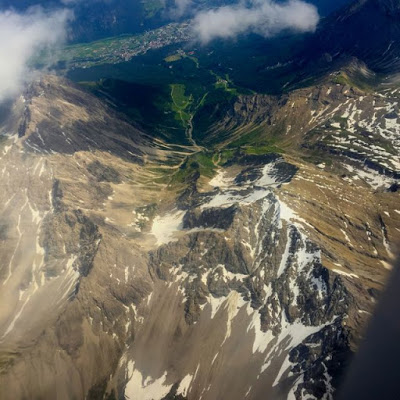 Getting to the airport and the flight from the UK on easyJet was a total nightmare but all was forgotten when we were coming into land in Innsbruck – I had never been to Austria before – and it was spectacular; snow-capped mountain peaks and plunging verdant valleys – total Heidi! 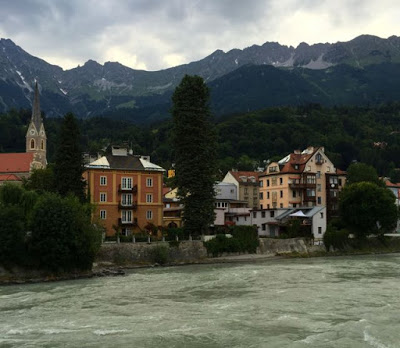 The Hotel Congress (is this where they come for dirty weekends, says he!) was superb in a very modern, Austrian kind of a way.  Huge room with spectacular plate glass windows overlooking white peaked mountains and a milky green snow-melt rushing river.  Obviously busy in the skiing season with basement boot rooms, sauna and a chair-lift right opposite, it was very quiet now.  Realised I needed a hat that wouldn’t blow off for this bike trip and bought a Tyrolean skiing cap from a display case in the darkened bowels of the hotel (it took the receptionist about 20  minutes to find the key). Buying the cap was the sum total of my preparation for what was to be my life on two wheels for the next week – silly me. But we felt everything was going pretty well so far, so went out to explore Innsbruck.  Well, all I can say is, we have to go back sometime – it was just lovely. 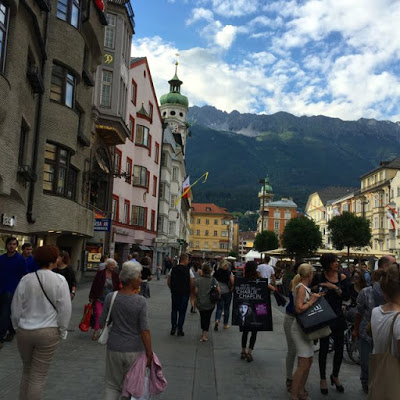 We just happened to be reading Bill Bryson’s tales about travelling in this part of the world Neither Here Nor There in 1990, but nothing seems to have changed since then and his experiences seemed to be reflecting our own.  Here are just a few of them.

1.  The Locals: I have never been anywhere else in the world where the people were so unfriendly – no passing ‘hello’ smiles, no eye contact in lifts, no greeting across a breakfast room – it was very weird.

2.  Dining Out:  This is one of the few places I have been where the menus were totally unintelligible and you are really a little scared about what you are ordering.  Bill Bryson talks about seeing mit schlag on a menu and thinking it sounded awful, didn’t order it – only to find out later that it was whipped cream and would have been perfect with his strudel.  That’s entirely our problem for not speaking the language (still, I can’t see a real need for Austro German?), but it is very off-putting – everything sounds like someone clearing their throat. You just have to remember when ordering that pork is life in Austria as you are bound to get some part of the animal on your plate. So here in Innsbruck for the first time, we did our usual thing and tried to find a restaurant where the locals were eating and, of course, had what the locals were having – and ended up with something very porky, dumplingy and cabbagey (Scweinsbraten with Semmelknodel) with beer – of course. This was going to be standard fare for the next few meals. 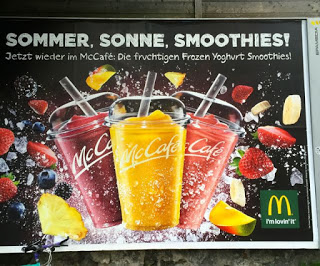 The more that things were different the more they were just the bloody same!
Made our way back to the hotel through the Innsbruck Botanic Gardens and was very surprised to see bananas and datura growing there – how do they do that in the snow?  Our scheduled briefing with Freedom Treks and been cancelled (“because there were only two of us”) and we were told that this would happen in the morning after breakfast on the way to our drop-off point near the Brenner Pass.  Just a teensy bit nervous at this stage. 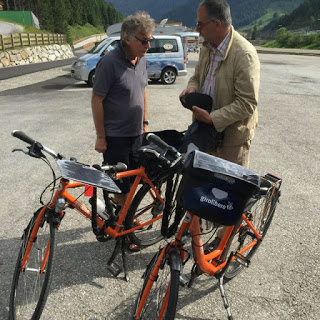 Matteo from Freedom Treks giving Michael our 5 minute briefing before we set off into the unknown for the next six days (he looks a little worried, don’t you think?)
Matteo’s parting words were ringing in my ears seven hours later when we reached Bressanone “it’s easy today – all downhill – will only take two to two and a half hours at the most”.  Finally collapsing in our hotel room in Bressanone with my legs, bum and back aching I knew two things; Either Matteo had never cycled from Innsbruck to Bressanone or he was a consummate liar AND, body willing I would do it all again tomorrow hey, we WERE doing it all again tomorrow – it was absolutely wonderful – like cycling through The Sound of Music. 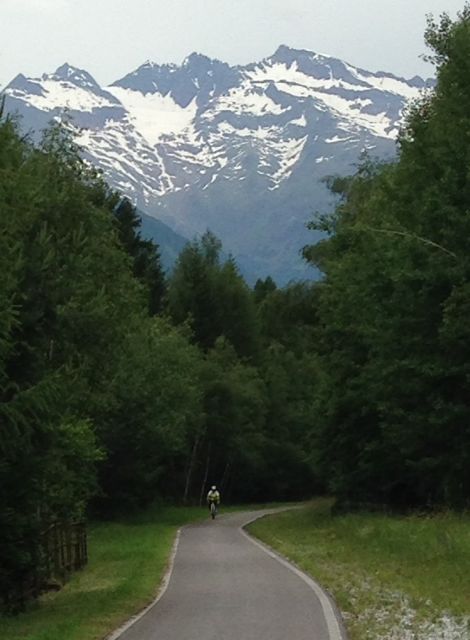 Somewhere on the cycle track on the way to Bressanone
For almost all of the six days we were on a designated cycle track made from an old rail route which followed the new train track, motorway and river, but not always, and they were the best bits; the ones that ventured into the forest, along the edge of a glacier, through picturesque villages, around vineyards, orchards and fields of flowering crops.
The trail notes were very good – all we had to do was follow them – how hard could that be? Well, we did get lost quite a few times but that was often down to confusing similar sounding place names (Marco and Macio?) and all the signs being in both Austro German and Italian – take your pick! 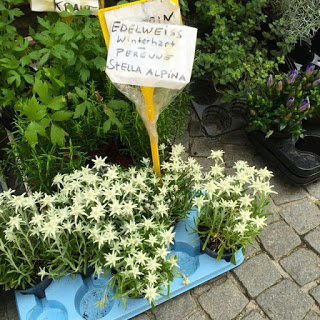 How do you know you’re in Austria? – you come across a stall selling Edelweiss
On this first day there were also quite a few diversions on the trail with Achtung! signs accompanied by a picture of rocks falling – hence the lengthy delays.  What we found out about the Austrians, lesson number 3.

3.  Signs are there to be obeyed and Austrians obey them  There was no way that any other person, apart from Michael and myself and a few Italian bikies, would even investigate a track with a diversion sign on it – even if it meant untold delay and a hellish detour onto the autostrada – which was extremely dangerous and very scary (we tried it).  We quickly learned that these diversion signs were put up ‘just in case’ and after venturing forward on one realised that it was because of something trivial e.g. a minor rockfall and no problem to get around (as he said “They’ve obviously never had to negotiate the Montecollum Road to Goonengerry after a thunderstorm”!).  We saw a whole bunch of familiar obedient Austrian cyclists lurch into Bressanone about two hours after us – looking lost, fed-up, and sweaty after struggling up hill and down-dale just so they wouldn’t have to disobey a sign on a bike trail! 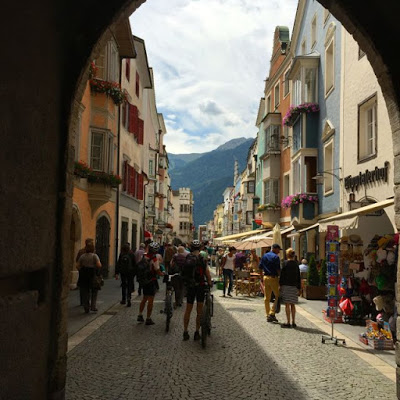 For part of the day we travelled along the Eisack River valley to the very pretty town of Vipiteno which was full of cobbled streets, clock towers and sightseeing Italian tourists..  We soon realised that one of the real joys of this journey by bike was coming across lovely places like this that we had never been to before and, were unlikely to ever visit again – which made it even sweeter. 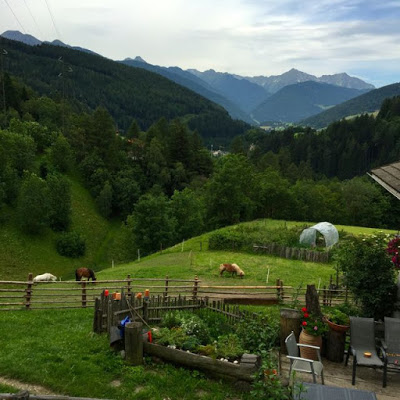 This glorious Tyrolean countryside made your heart zing.  I spent most of the day singing to myself (you can guess what the soundtrack was) and crop spotting; maize growing on the river flats for winter fodder, home gardens that shouted self sufficiency and, as we got closer to Bressanone, grapes and orchards full of cherries, apples, pears and fields of tomatoes and cabbages.  There was one mystery;  I couldn’t understand why I didn’t see one cow when we had passed numerous yoghurt and cheese factories and why there was an overpowering dung odour that heralded our arrival at every farm.  Then I saw these huge, ornate sheds and realised that the cows were being reared inside them – why weren’t they out in the fields?  These are the tiny thoughts that consumed me as I pedalled and pedalled the 65 km away – kind of zen?

As we cycled into the late afternoon (probably shouldn’t have had that second beer and more dumplings for lunch?), warm gusts of wind, that occasionally blew in the high country, were now beginning to cook us as we headed further south along the valley and we started to strip off our layers of clothes, finally reaching our hotel in Bressanone absolutely exhausted – a hill too far!

Highlight of the day grandparents having a picnic by a river with grandchildren, she in dirndl skirt and he in lederhosen, Tyrolean jacket, long white socks, hat with feather in it and smoking a pipe – this was not a one off – we got quite used to spotting folk, just going about their everyday business dressed like the Von Trapp family.
To be continued.  Day 2 Bressanone to Bolzano …………. 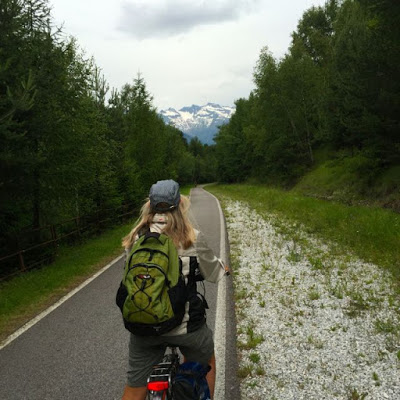