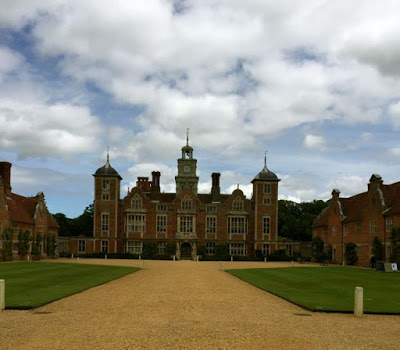 This is the second in a series of some lesser known English gardens that started with Helmingham Hall in Suffolk – which I visited on my last trip to the UK in 2015. Now, some six months later and back home in Australia, I had put the afternoon aside for some weed pulling in the veggie patch, but a summer downpour has put paid to that – so, instead, I can transport myself back to beautiful Blickling instead –  Of all the wonderful old piles to choose from – why Blickling?  Grab a cuppa and let me take you there for a few minutes; the house is beautiful; the paintings incredible; the library breathtaking and the gardens, simply stunning.

A BIT OF BLICKLING HISTORY 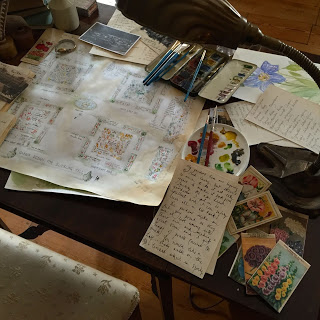 Norah Lindsay’s original designs for the parterre at Blickling and her painting of the famous blue poppies that she planted here in the Secret Garden. 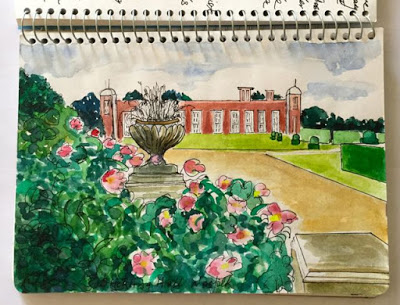 I love to do quick watercolour sketches in my travel diary.  The peonies were in their full glory when we were at Blickling  The weather may have been gloomy, but the colours in the garden were not.

THE HOUSE
My first sight of Blickling was honestly breathtaking, glimpsed through a gap in the immense yew hedge that surrounds this impressive Jacobean, red-brick, manor house with its sweeping gravel driveway and swathes of manicured lawns.

With an estate of 4,777 acres and gardens of 55 acres, Blickling has a rich history that is full of myths and legends – and ghosts – and is purported to be the most haunted house in England but, with its history, I’m not really surprised.  The Boleyn family built the original house here, that burned down in the sixteenth century, and the current house has a lovely portrait and statue of Anne (still with her head on!)  It is said that every year, on the anniversary of her execution, Anne Boleyn’s headless ghost arrives at Blickling in a carriage driven by an equally headless coachman – she then proceeds to wander around the house with her head under her arm. 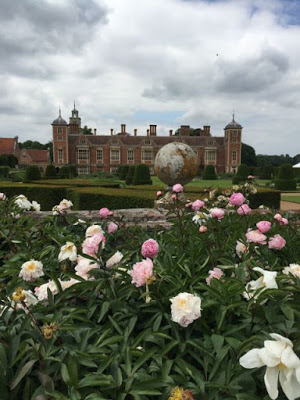 HIGHLIGHTS OF BLICKLING HALL
We had wonderful volunteer guides that made the place come alive and I could have wandered around here all day – it is just jam packed with treasures and absolutely fascinating – but I’ll be brief because we have to get to the garden! 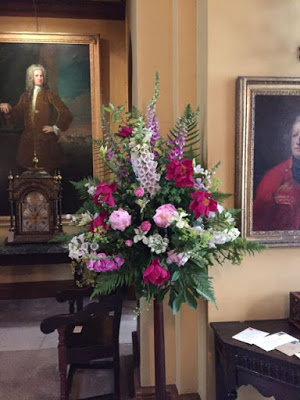 Inside Blickling, with a Gainsborough painting of the Duke of Buckingham and flowers from the garden 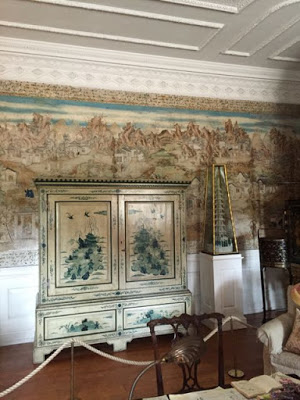 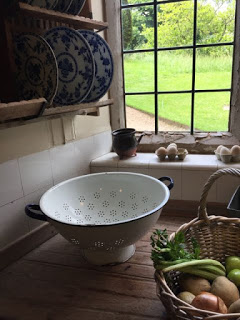 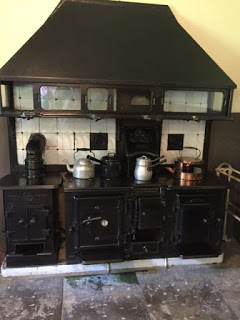 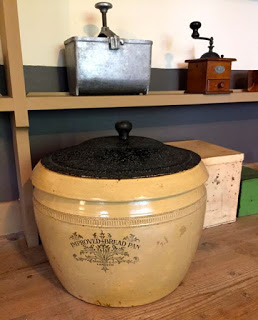 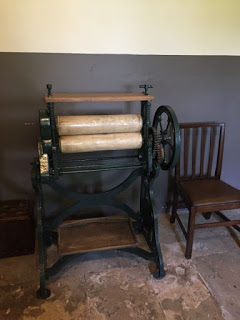 
You actually need days to take it all in properly – all 55 acres of it – with beautiful LINDSAY PARTERRE  and SUNKEN GARDEN, SECRET GARDEN (with blue poppies), an 18th century ORANGERY – used to house the potted citrus in the winter time), HERBACEOUS BORDERS, and ancient HA-HA-which is a ditch, invisible from the house, used as a romantic rural landscaping device so that sheep and cows could graze almost right up to the front door without being able to escape into the formal gardens (or the dining room!).

The WALLED KITCHEN GARDEN was under renovation, when we were there, with a huge effort to try and restore it to its former glory.  This will be just about the last piece in the puzzle of mapping the lives of the people who lived and died at Blickling – what did they grow and how did they feed themselves? 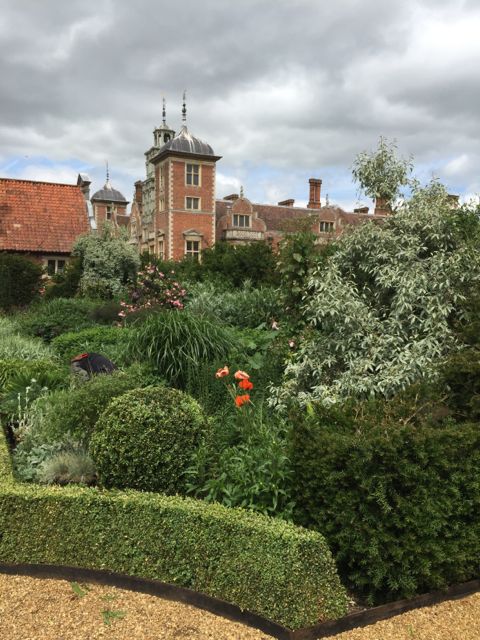 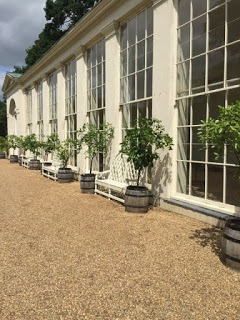 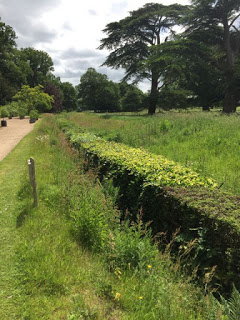 The Ha-Ha and Orangery 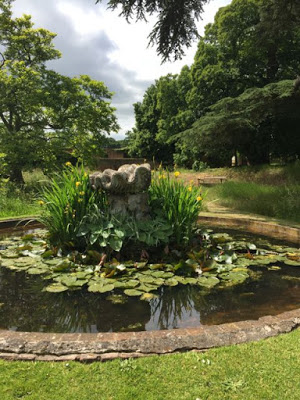 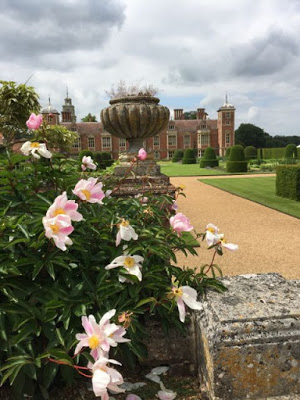 NOTE:  It appeared me, as I was wandering around the house and became acquainted with Lord Lothian and his story, that it all seemed vaguely familiar.  And then it struck me – Foyles War, the BBC WW2 drama series. One of the episodes was called the ‘White Feather’ and centred around a group of ‘appeasers’ and German sympathisers called The Friday Club with mostly aristocrats as its members.  I know the creator of Foyles War, Anthony Horrowitz, based every episode on historical fact and just left me wondering………? 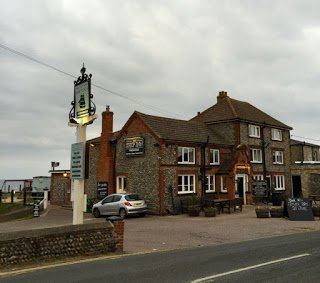 After a marvellous day out, under a leaden sky, we drove to the Becton on the Norfolk coast and had one of the most delicious meals of our whole trip at the Ship Inn – local, dressed Cromer crab.  I can still taste it now – Michael says the local ale was pretty good too. Our overnight B & B – the charmingly named May Cottage – was one of the best too – I can highly recommend it.

NOTE TOO:  “Can you please tell me why the English have their own religion – not Catholic or Orthodox”? This was a question posed to me, some weeks before Blickling, on a ferry from Corfu to Paxos by the lovely Russian tour guide, Anna.  We had struck up an unlikely conversation, as you do, and she was very keen for “all knowledge”.  She said that her compatriot clientele often asked her all sorts of questions, particularly to do with religion (being largely orthodox), and she would like to be able to answer them.  I don’t know if you have ever tried to explain the shenanigans of Henry VIII and the Reformation to anyone but, in the telling, it sounds bizarre.  “Well, he made up his own religion so he could divorce his wives because he wanted a son – but some of them, like Anne Boleyn – he chopped their heads off to get rid of them”  Anna “So who his head of English church – not pope?” And so it went on. It really was a surreal conversation; when she found out we were from Australia, not England, she said “Is that near Greenland”?.  The conversation came to an abrupt halt, probably fortunately, with her question “So this Henry, he was very sexual, da?” At this point we noticed a commotion and realised that one of her party was being resuscitated on the beach he had tried to swim to after a gut full of booze and tucker – he had suffered a heart attack – he owes his life to two knowledgeable strangers.

I wish Anna could have been at Blickling with me.

If you have found this information useful, please consider a small donation.