Cycling in France – Bordeaux and beyond Day 1 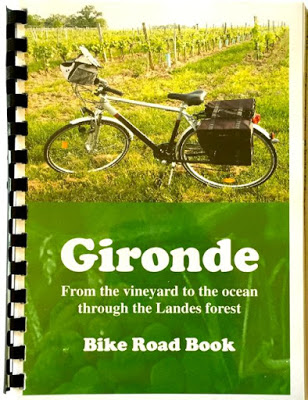 in 2015 we did a cycling trip from Innsbruck to Verona and it was so wonderful that we wanted to do the same kind of thing again, only somewhere different. We love the south-west of France and had glimpses of Bordeaux on a previous trip, vowing to return – the city and whole region is just so lovely.  This was where our trip in August 2016 started.

How bad could cycling through the premier wine growing of France be with its chateaux, historic villages, the forests of Aquitaine to the seafood heavens of Arachon and Cap Ferret on the Atlantic coast – staying in comfort and eating and drinking some of the best food and wine you are going to get anywhere in the world?


First let me point out that we own no lycra, but after last years’ experience we did get some cycle touring shorts that have a kind of padded nappy insert – as me mate lovingly said “all ready for the nursing home Nanma”? 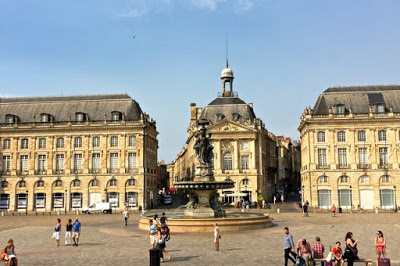 Place de Bourse, Bordeaux where our trip began
DAY 1  Cadillac to St Macaire 50km  28th August 2016
Our trip started in Bordeaux after a short flight from the UK.  We opted to spend a couple of days here and, let me tell you, Bordeaux is wonderful.  See my previous post for a rundown on what to do if you have a couple of days here. 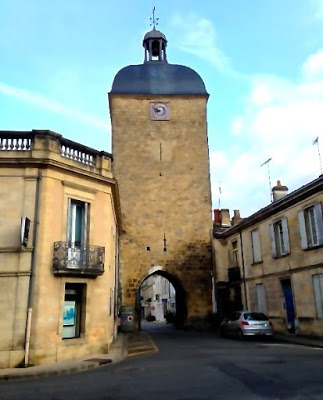 The leaning clock tower of Cadillac

We were then taken by taxi on the 30 minute journey to Cadillac where we spent the night at the lovely Chateau de la Tour Hotel which had the added bonus of an outdoor swimming pool and three acres of  leafy  grounds.  Things got even better when we realised that the restaurant in the hotel had a pretty good reputation so we booked for dinner that night on the terrace – we were not disappointed.  Unexpected delights like this, we have discovered, are one of the features of these cycling tours – you go to lots of places you have never been to before and probably never go to again – a real adventure, with fabulous food thrown in savouring the novelty of it all. 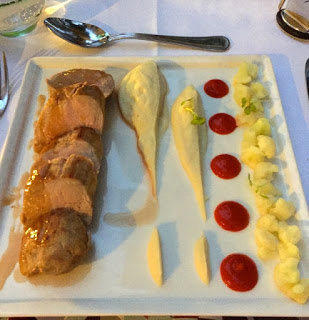 Medallion of pork with truffle oil potatoes & roast capsicum sauce
Cadillac has a lot to offer for a stopover – no pink American cars but an historic 15th century chateaux,  12th century church and cobbled market square.  My luck was in because it was market day and a short stroll into the town from our hotel turned into a two hour culinary adventure. 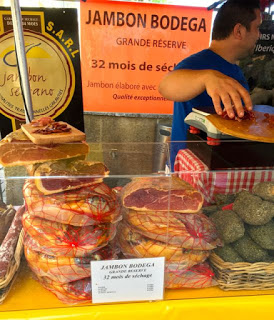 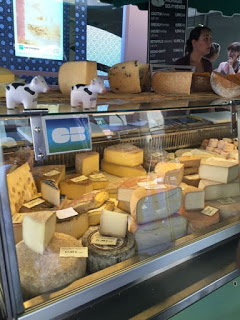 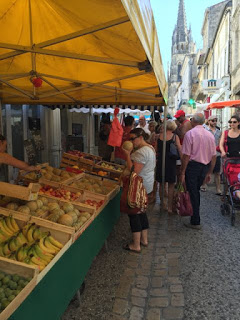 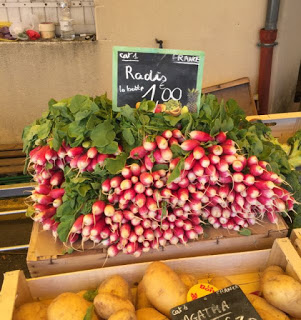 Ah, the joys of a traditional French produce market – which I ate my way around and bought some pate de campagne from the butcher for our picnic the next day (he had four different homemade kinds).  With that and some REAL bread and tomatoes we were all set.
Next day we set off bright and early on our bikes, which had been waiting for us in the grounds of the hotel, looking forward to our ride through the premier Bordeaux wine country.  The weather forecast was promising a scorching hot day of over 36oC – which I was not looking forward to – my thermostat does not work too well these days, so we wanted to get the bulk of the ride out of the way before late morning. 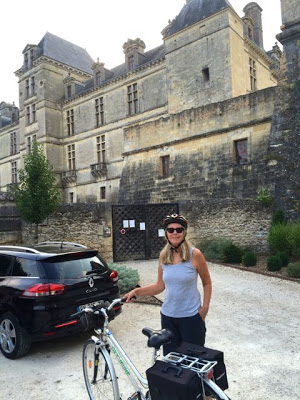 The start of our adventure – outside the Cadillac Chateaux
We started out on a bike path along the lovely Garonne River and then headed into rolling vineyard country and past many small chateaux with wine tasting – just a tad bit early for us though – 8am on a Sunday morning.
Could see from the outset that this was going to be more of a walking/cycling trip – with my bung knee paining me and the heat I just couldn’t get up the hills and ended up walking a fair bit!  What an absolute joy it was to be out here though – a great sense of freedom.

Arrived in the lovely village of VERDELAIS, cycling through the beautifully proportioned town square lined with plane trees still dressed in their summer emerald green foliage. and stopped at the only place open for a coffee watching the locals turn up for Sunday morning mass in the 16th century basilica.  I was drawn in when the choir began to sing with the congregation joining in – a moment of peace, joy and cool!The bell tower is topped by a magnificent gilded copper statue of the Virgin Mary, after whom the basilica is named – Notre Dame.  I wondered, at the time, if this town was particularly devout as the church service was packed – not the half dozen elderly ladies you get in St Michael’s in Mullumbimby on a Sunday.  I subsequently discovered that the church houses a famous shrine – a 14th century wooden statue of Our Lady of Verdelais, that is said to perform miracles and is on the pilgrim route through France. I also read of a ‘Black Virgin’ cult centred around this statue and the church – intriguing non? 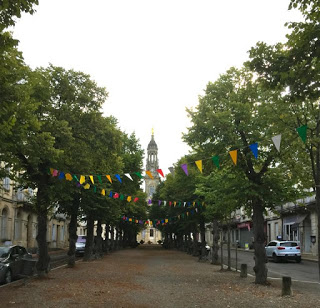 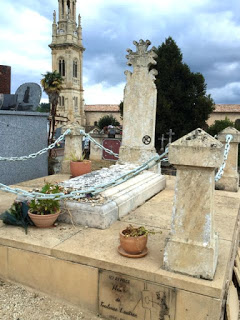 Our short coffee stop got even more interesting.  The small hole-in-the wall cafe, opposite the church, I am sure was just open on a Sunday to take advantage of the post service need for refreshments by the huge congregation for the rest of the place was as quiet as the grave. In fact, the cafe overlooked the village graveyard which snaked up the hillside and, mooching about, I was astonished to read,  on a faded sign by the gate, that Toulouse Lautrec was buried there – the renowned Impressionist painter of can-can girls, famous singers, prostitutes and the cafes around Montmarte, Paris at the turn of the last century.  As a teenager I loved his poster art and had a copy of the famous ‘Jane Avril’ on my bedroom wall – all that talent, dazzling paintings, debauchery and absinthe drinking – what was not to love for a nice girl from Brockley.
Lautrec was born in Verdelais and was living here in the family villa when he died of a stroke, aged 36, in 1901, after suffering years of alcoholism and venereal disease  Its hard to believe that a recent painting of his sold for US22 million for his grave is unlovingly neglected and looks hardly visited. 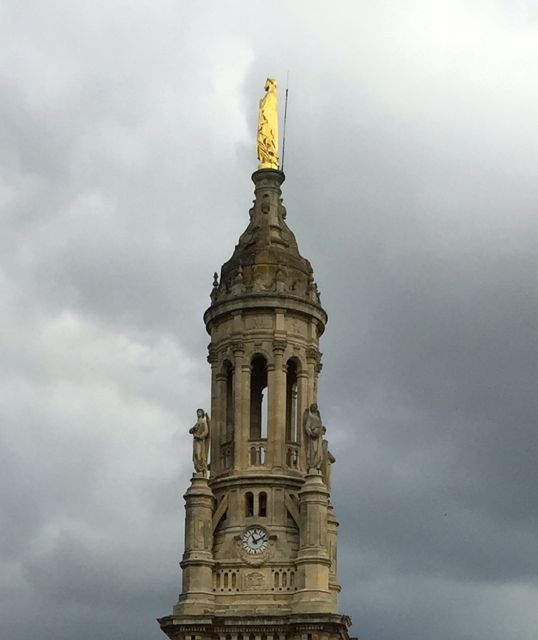 Magnificent bell tower of the Basilica of Notre Dame in Verdelais topped with her gilded copper statue.
So after cycling through verdant vineyards, with this year’s vintage ripening on the vine, and after 50km or so, we finally cycled into the charming and historic village of St. Macaire to find our hotel, where we were met with our sight for the day – a man rolling a barrel of wine down the street!  To be continued…….. 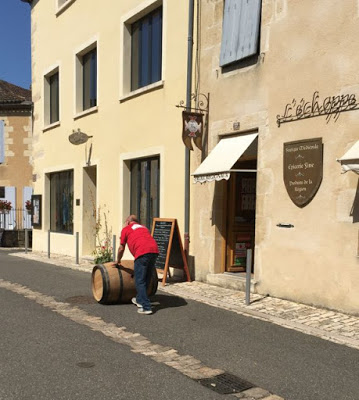