Miles from anywhere, close to everything ………. 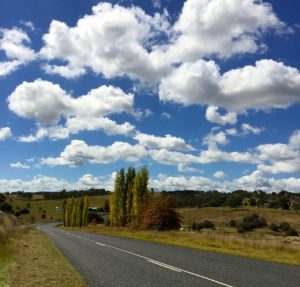 There’s a lot to be said for discovering your own back yard, hopping in the car and taking the road less travelled and one that avoids going anywhere near an airport.  That’s exactly what we did for two weeks over Easter – we tossed a few things in the back of the car and took the back roads and byways from our home in northern NSW,  heading south to Canberra where our choir was performing at the National Folk Festival.  In two weeks we travelled over 3,000 km and, I have to say, it was absolutely wonderful – stimulating, easy and relaxing.  I came back feeling as though I had been away for two months, not two weeks, which is always a sign of trip worth taking. 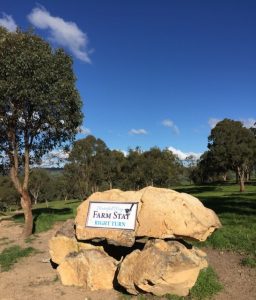 I had booked farm stays en route, and I am happy to report that Australia has moved into the 21st century – finally.  All the accommodation we stayed in was comfortable, clean and charming with everything I wanted  – real coffee, local maps, dishwasher, chopped wood, stocked pantry (with olive oil), good bathrooms, classy linen and COMFORTABLE PILLOWS – I didn’t need to use my own from home once.  Oh, and that’s before I have mentioned the stunning locations, heavenly views and peace and quiet.

We drove south through Ballina to the the big river country with timber houses on stilts surrounded by swaying paddocks of emerald green sugar cane to Ulmarra which has to have one of the most well stocked book shops in the country – I could barely see the owner sitting behind her cash register. Who said print was dying?  Ulmarra also has a fabulous converted pub on the banks of the mighty Clarence River that has been turned into a classy eatery, and I can’t think of a better place to have a break, read a book and eat a plate of scones with a cup of tea. 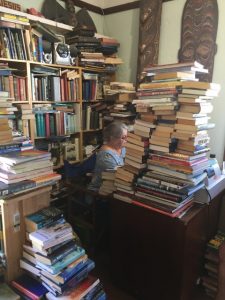 On to Grafton,  then headed west on the Waterfall Way to Armidale – our destination a  beef stud of Angus and Charolais cattle with a stay for a couple of days in the old farmhouse.  I knew that this trip was going to turn out well when young Lucy – seventh generation of farmers on this land, turned up with a loaf of freshly baked bread to greet us.  Engaged to be married, she has taken on the farm-stay as her project and, if she does everything else in her life with such passion and attention to detail, she will make a success of whatever she turns her hand to.  Now in my seventh decade I know that I probably should have married a farmer!  I love cows and being on a farm – which is a long way from the East End of London, where I was born.  Is there still time, I wonder?  Lucy had created a lovely cottage garden around the house full of late flowering roses and dahlias and, lucky us, a vegetable garden, and I was able to out and pick fresh zucchini, basil and tomatoes for our dinner. 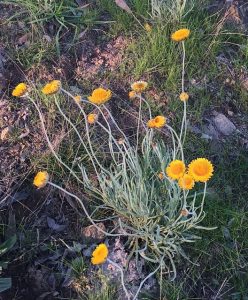 I just went out walking – early morning, twilight – didn’t matter – I was happy – trying to identify the trees, grasses and late summer flowering wildflowers – like these Paper Daisies, Xerochrysum bracteatum , noticing the health of the trees and pastures and appreciating the effort and love that the custodians of this land had put in over the past 160 years.  Not every farm is like this.  The New England tablelands are incredibly lush and beautiful and I urge you to get out there and take it in.  It’s a particular treat at this time of years when all the exotic trees are in their autumn glory; golden poplars, scarlet claret ash, fiery liquid ambers ………………………. 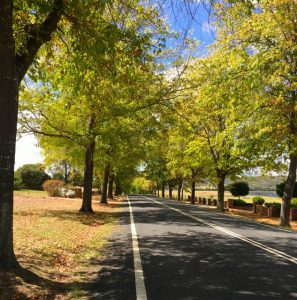 This undulating land had 4 km of trout river and me mate was itching to get a rod twitching – next time maybe, for we will be back.  The air was crystal clear in all shades of blue to purple – all you could hear were the birds calling and the odd moo. 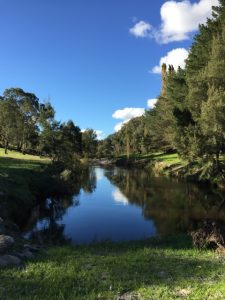 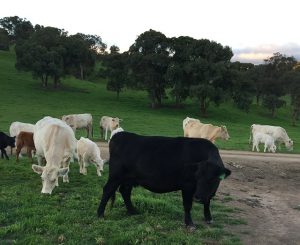 Soundtrack to our stay:  I like to play music while I am cooking dinner and yipee, I found an ancient, dusty ghetto blaster with a basket of cassette tapes that mostly worked – remember those?  Me mate was happy – what was on offer was Dire Straits ‘Sultans of Swing’ and the best of the Eagles and some homemade tapes that were an eclectic mix of Aussie rock, English punk and Dean Martin!  On the road it was Vivaldi and Van Morrison.

Australia has over 500 National Parks and I have a long held desire to visit them all – this is
my ‘bucket list’ if you like, and I purposely booked our accommodation for this trip close to a National Park so that I could begin to tick off some I have never been to before.  We started with New England National Park, but it could have been one of about 30 that we have in our region within a few hours drive of where I live in Mullumbimby. 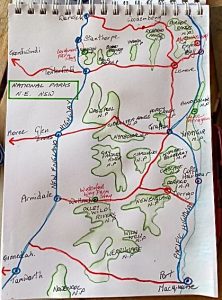 A quick sketch of some of the National Parks of our region.

New England NP – all 673 square kilometres of it, is high up on the Great Dividing Range that runs like a backbone down the east coast of Australia, so every walk takes you up where the birds soar on down into valleys with rushing streams and cascading waterfalls – it’s magic.

New England National Park – why you should go

The paths are clearly marked with great information signs and maps and we did two circular walks from the car park of a couple of kilometres each.  This is a Park where the rocks drip, the moss glows in the dark and lichen hangs in the trees like an old man’s beard. 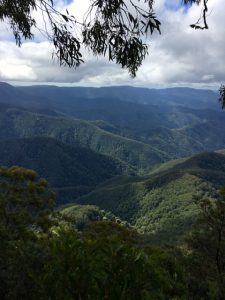 Looking east over New England and Dorrigo National Parks towards the Pacific coast.

Perched high up where the eagles circle, we couldn’t see one building or any signs of human habitation, just undulating hills and treetops – it was like a green velvet cloak had been thrown over the land, and then something very special happened.  We were walking through a mossy covered ridge line when I suddenly heard all the birds of the forest, one after the other calling, and I realised I was listening to a lyrebird mimicking its feathered forest friends.  The naturalist David Attenborough has said that of all the creatures he has encountered in his long years of exploration, he considers the lyrebird to be one of the most remarkable.  And then we saw it, and I stood transfixed as this male scurried about the forest floor, displaying his extensive vocal repertoire and fluffing up his magnificent tail feathers – his calling card to attract the female of the species.  In all my years of walking in the bush I have often heard lyrebirds but never sen one before.  I managed to capture some video footage – not fantastic quality for I was trying to stay hidden, but thrilling nevertheless.

TOP TIP: On the Point Lookout Road that goes into New England N.P., is the Dutton Trout Farm where we bought a really delicious pack of smoked trout fillets that had been seasoned with native bush pepper.  You can take tours there but its also nice just to have a wander around.