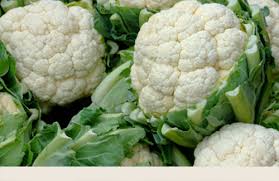 Cauliflowers are fresh, plentiful and cheap at the moment – only $2.50 at our Farmer’s Market last Friday.  There’s just one problem – you have to cook them the right way or they can be pretty uninspiring AND most children just turn their nose up at them.  How I like them best is in Indian cooking – they lend themselves to being spiced up, and the French found a away by covering them in cheese sauce, but none of that was going to work with what I was making for my daughter’s birthday dinner – a Moroccan lamb tagine.

This simple dish was inspired by the latest trend in serving cauliflower blitzed to crumbs in a food processor, usually as a carbohydrate substitute, such as rice or quinoa, and often served raw – that wasn’t going to work for me, but it got me thinking. I liked the idea of it chopped really finely but  I wanted to turn it into a cooked vegetable accompaniment to my lamb dish with couscous – and something the children MIGHT like.

Well, it worked.  Everyone loved it and two out of three of the children asked for seconds – now I call that a winner.  Most of the family didn’t even realise that it was cauliflower that they were eating and enjoying so much.

WHAT YOU WILL NEED

1. Break the cauliflower up into pieces and blitz in a food processor until it resembles large breadcrumbs.  Don’t continue past that point otherwise you will end up with a pulp – not what you want.

2. Heat up a wok and, without adding any oil, toss in the flaked almonds and stir around for one minute, or so, until they look toasted – be careful not to let them burn.

3. Remove the almonds and set aside – now add the blitzed cauliflower to the wok and stir around for one minute until the crumbed cauliflower softens a little and bits start to turn golden.  IT’S COOKED.  Now add the toasted almonds, chopped parsley, freshly ground pepper and salt and serve – that’s all you do. 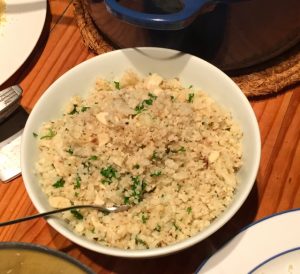 A five minute dish that is cheap and healthy.

WHY IS CAULIFLOWER GOOD FOR YOU?