The Myths About Adani Jobs

In response to my grand children’s questions about the state of the world and my growing anger over this disastrous coal mine, I joined our local Stop Adani Group in the Byron Shire, and the question about jobs is the one I am most often asked  I’d grab a cup of tea and sit down if I were you because it’s going to make your blood boil. 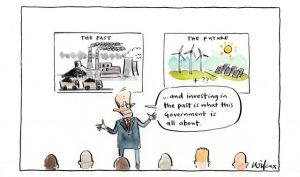 The controversy over the Carmichael coal mine has been pitched as a choice between saving the planet or providing much needed jobs in Queensland. What is the truth of the matter? There has been so much conflicting information that’s its hard to see a clear picture and give a definitive answer. Here is a lay person’s attempt to shine some light on this with the brightest torch I could find, clenched tightly in my hand.

Myth: Adani has claimed in its advertising that the mine will bring 10,000 jobs, something that Queensland Premier, Annastacia Palaszczuk, is fond of repeating as fact, whenever she has the opportunity. It has also been picked up and run with by every politician that has an interest in keeping us in the fossil fuel dark ages, including both sides of Federal Government.

Fact: In his January 2015 Report to the Court of Queensland, Adani’s own expert, Jerome Fahrer, stated that the claims for 10,000 jobs were “deficient”. He then went on to say:

“ Over the life of the project it is projected that on average around 1,464 employee years of full time equivalent direct and indirect jobs will be created”.

Now if that’s not a tub of molasses, I don’t know what is? In his article for the Australian Independent Media Network in May of this year, Michael Griffin attempted to make sense of this sticky mess. He says that to understand the real economic benefits the mine will bring, if any, you have to view it in the context of various subsidies, royalty exemptions, waivers of clean-up costs, free water entitlements and low interest loans Adani will receive from the Queensland and Federal Governments – which amount to $1.32 billion. Fahrer’s statement clearly indicates that the 1,464 direct and indirect employee years of full time equivalent work the mine will allegedly generate will be created over the course of the life span of the mine (projected to be between 25 and 60 years) and not all at once.

Griffin does the maths and works out that this means 58 full-time jobs if the mine goes for 25 years and 24 full-time employees if it lasts 60. His torch is obviously brighter than mine and he comes up with this neat little equation

How can this mine operate with so few staff, you may ask yourself? The answer again comes from Adani, Jeyakmur Janakaraj, CEO of the Adani Groups Australian operations in the Mining Global online newsletter. He sates that:

“We will be utilising at least 45 four hundred tonne driverless trucks. All vehicles will be capable of automation. We will ramp up the mine, everything will be automated from mine to pit. In our eyes it will be the mine of the future”

So the myth about Adani jobs has been on the public record for over two and a half years, as has most of the exposure of Adani’s corruption, bribery, environmental destruction, tax dodging, money laundering, use of tax havens and illegal mining that we saw on ABC’s Four Corners

Fact: By 2020 – that’s in about two years time, there will be more jobs in renewable energy in Australia than there will be in coal mining (Clean Energy Council). The world has moved away from coal as a power source and embraced renewables. By contrast, Australia’s Government is dragging its feet and getting left behind in direct opposition to the wishes of the majority of the people. 72.1% of those polled in a recent survey preferred solar to coal (AMCS, March 2017).

Fact: One of the world’s largest solar projects has been approved in western Queensland. The 1000 MW Equis Energy solar farm will cover 1424 hectares and generate clean energy and between 300 and 400 jobs.

Fact: The coal mining town of Coalsville*in North Queensland had a proud and long history of coal mining, with the last working pit ponies in Australia toiling there right up until 1990 and coal from the mine firing the local power station. When the mine closed, along with the power station, the town too slowly died. All of that is about to change as Coalsville* vies to become Australia’s solar capital with two companies investing $9.5 million and building a 113MW solar farm providing 200 jobs. Those jobs have brought the town to life and solar energy is now firing the old power station and producing electricity once again.

Will Adani trigger a negative impact on jobs?

Fact: The global demand for coal is declining. Interestingly, the Hunter Region of NSW produces a higher quality, ‘cleaner’ black coal than the coal expected from the Carmichael mine and currently continues to have an international market. The volume produced at the Adani mine may, however, bring the viability of these mines into question and the jobs that go with it.

Fact: There are almost 70,000 jobs up and down the Great Barrier Reef – these are in jeopardy, both directly and indirectly. There are currently 50 coal tankers trading annually out of Abbot Point (near Bowen in Queensland) – increasing to 500 if the Adani mine becomes operational. This would require an expansion to the Abbot Point Port and a further dredging of up to 1.6 million cubic metres of sea floor and an ‘upgrade’ of the 2.4km jetty/conveyer belt that stretches out over the Reef to deep water.

There is also the burning question of pollution. Adani was recently fined $12,000 (well below the industry norm) for releasing more than eight times the permitted amount of sediment into the sea at Abbot Point – a fine they are contesting. In India, we know they have an appalling record for the flouting of environmental law and illegal operations (Four Corners). Adani’s Australian venture would add billions of tonnes more carbon dioxide into the atmosphere over its life affecting not only the health of the Reef, but everyone on the planet. This coal mine is set to become the seventh largest source of carbon pollution in the world located at one of the 7 Natural Wonders of the World.

Fact: Data from the Bureau of Meteorology shows that temperatures in Australia have been steadily rising since the mid 1970’s and Queensland has been experiencing one of the most devastating droughts on record. “Drought affects agriculture, tourism, employment and livelihoods in Australia, with severe economic repercussions. By March 2014, 75% of Queensland was declared in drought – the largest in history” (Climate Council). This translated to the loss of more than 15,000 jobs and a cost to the economy of more than $5.4 billion annually.

Fact: There may be short-term jobs in building the rail link from the mine in Galilee Basin, which is nearly 400 kilometres inland, to Abbot Point Port, but again this will be funded by taxpayers through a Federal Government NAIF loan of $900 million and on 3,400 hectares of compulsory acquired farmland and land of the traditional owners. Where is the cost benefit here when the granting of this loan will be at the expense of more sustainable projects in the pipeline and the loss of existing landholders livelihoods?

Myth: Adani will bring much needed jobs to regional centres like Townsville and Rockhampton.

Fact: In June this year Adani announced the establishment of a regional headquarters in Townsville, promising the provision of 500 jobs. By September, nothing had happened. Instead, the headquarters was staffed by about 80 workers transferred from Brisbane. To date this proposed ‘jobs portal’ has advertised for less than seven jobs.

Fact: Townsville and Rockhampton councils have agreed to pay $18.5 million each of ratepayers’ money to Adani to build an airstrip at the mine site with the promise of fly-in, fly out (Fifo) jobs that have yet to eventuate.

All of these manoeuvres around the project are part of a more complex strategy to keep the Carmichael project alive as long as possible to facilitate the refinancing of the Abbot Point coal terminal and ultimate servicing Adani’s debt – again highlighted in the Four Corners programme. Lucky us – the Australian taxpayer is about to be in millions of dollars in debt and the proud owner of a railway to nowhere with an airstrip at the end of it.

* It’s actually Collinsville, but we can’t let the truth get in the way of a good story now can we?

With grateful thanks to Cathy Wilcox.