Have We Stopped Adani Yet?

Almost, but not quite.

If you follow the news you will notice that a lot has happened in the Stop Adani campaign lately.  In a few short months, from when I joined our local group in the Byron Shire in April 2017, there has been a distinct shift in the overwhelming support for the mine from industry, the general public and government,  to having second thoughts, and now, in the latest polls,  a clear rejection of this proposed coal mine in the Galilee Basin that is projected to be one of the largest carbon polluters in the world.

How has this come about?  Well, largely from activists groups, up and down the country, just like ours that are having a real impact on the political strategy of both parties – particularly where marginal seats are involved;  and on industry and commerce through consumer advocacy, political lobbying and shareholder activism.

Thousands of letters and emails have been written by #StopAdani and other mass social movements (read – pissed off people); meetings have been  met; resolutions passed; sit-ins staged; marches marched;  petitions signed; phone calls made; politicians confronted; fundraisers held; film nights screened; buckets shaken; nationwide days of action staged from Canberra to Cairns AND we’ve bought the t-shirts and stuck the stickers.  Don’t think for one minute that this is not having a real impact – it is. 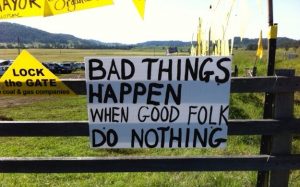 A sign from Bentley, northern NSW, where coal seam gas exploration was proposed and a nine month camp-in protest was held to prevent it.  Ultimately we did – uniting environmental activists and the farming community to Lock the Gate.  If you haven’t seen the award winning documentary ‘The Bentley Effect’ take a gander and be inspired.

To assess the current state of play let’s start by having a look at the financial backers of the Adani project – the banks.

Adani’s quest for funding is looking bleaker every day.

What has happened in Byron Shire highlights similar outcomes all over the country.  The very first Stop Adani event I went to was in Mullumbimby.  We had a a march – short in length but big on passion,  from the centre of town to the Commonwealth Bank; at the time they were the last of the big four Australian banks willing to fund Adani after Westpac, NAB and ANZ had pulled out – largely as a result of consumer discontent and active lobbying.

This was followed up in Mullumbimby and Byron Bay with persistent contact from their customers, intent on making the banks’ investment focus more sustainable, and from those unlikely goddesses,  the Knitting Nannas,  who held a yellow-themed knit-in every Friday outside the Shire’s Commonwealth branches with their humour, energy, music and commitment.  (I can tell you that most politicians just don’t know how to deal with the phenomena that is the Nanna’s, finding their unique approach unsettling – one likened it to being interviewed by Ali G.  Something must be working?)

The net result of this kind of groundswell of criticism of the status quo has led to the Commonwealth Bank pulling out too.  In just over a year, the big 4 banks have gone from their publicly stated support for funding the Adani mine to complete withdrawal from the project.

And now Adani has missed their self-imposed deadline of March 2018 for getting their finance lined up and on 6 March, at a press conference,  Matt Canavan (Federal Minister for Resources and Northern Australia)) stated that there would be no money for Adani from the EFIC, the government funding body for overseas investment that was Adani’s last best hope for Australian government finance.

Moreover, 30 of the word’s biggest banks, including the two largest Chinese banks, have refused to fund the project. 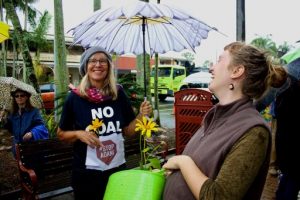 My first Stop Adani gig – a march to the Commonwealth Bank in Mullumbimby in April 2017.  It was all so new I had to improvise a t-shirt and was told that I looked like a marsupial activist – with pouch.

What about the NAIF loan to fund the rail-link?

The Northern Australian Infrastructure Facility or NAIF, a federally funded government body that was set to ‘loan’ almost a billion dollars of taxpayers money to build a rail-link from the Galilee Basin to the Adani owned Abbot Point coal terminal, has dramatically withdrawn its support.

Why you ask?  Could it possibly the letter writing morning tea we had in the park in Mullumbimby where hundreds of letters were creatively written to the NAIF Board and the Queensland Government telling them what a bad idea we thought this coal mine was.  Or, was it the scores of letters we individually wrote to each Board member expressing our displeasure at spending taxpayers money on such a short sighted project? 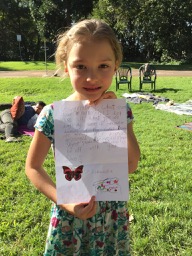 Letter writing in the park.  My eight year old granddaughter with hers.

Government.  Whatever your name is, I don’t like what you are doing.  My name is Lohwana.  Animals of the coral reef are having their homes destroyed.  Government, skyper, skidoo, hullabaloo – be off with you – shoo!!

I don’t, for one minute, think our letters turned the tide.  But collectively, when actions like this occur up and down the country it has an inevitable domino effect. Specifically, and in addition,  I know that over 50,000 Greenpeace supporters took action on the NAIF campaign; crowdfunding billboards, newspaper advertisements, mobilising for the Stop Adani National day of action in October, and making Australia’s largest ever crowd-sourced freedom of information request.

This seemed to ring alarm bells in some quarters.  Take the surprise announcement on November 4 2017, by Queensland Premier, Anastacia Palaszczuk that she  was withdrawing her government’s support for the NAIF loan funding after it was revealed that her partner was an employee of Price Waterhouse who worked for Adani on its application to NAIF.  Or the revelations that half of the Board of NAIF faced conflict of interest allegations for their business associations with the mining industry, which sparked a Senate inquiry and the ultimate resignation of two of the NAIF board members.

And finally, the biggest news this week.  Aurizon, Australia’s largest rail freight company that was going to build the rail-link, has withdrawn its application for funding from NAIF, giving another sign that Adani’s Carmichael coal mine remains stuck on the drawing board.  This decision has even bigger ramifications than thwarting Adani, huge as this is.  The Aurizon rail-line was also set to link a number of other resource companies in the Galilee Basin, like Gina Reinhardt’s GVK Hancock, to the Abbot Point coal terminal on the east coast, which would have given the green light for further expansion and destruction in the Galilee Basin and the Great Barrier Reef. 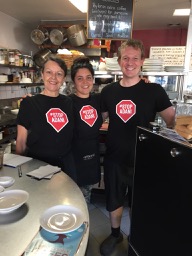 Lulu’s Cafe in Mullumbimby that recently held a fabulous, fund raising Stop Adani Indian feast with Linda and her team donating all the food, cooking the meal, serving and clearing up, and we had Bollywood dancing!  Local activism in action.

Not so long ago, it was easy to spot the environmental activists at the corporate annual meeting.

They were the ones camped out the front with drums and colourful placards – making a lot of noise and, arguably, not much of a difference.

Things have certainly changed – we have moved from the outside to the inside.  A new generation of grass roots activists organizations, like Stop Adani, have found a smarter, more targeted way of sending a message – using carefully-crafted shareholder resolutions calling for companies to act on environmental and social issues and by buying blocks of shares in the company to enable their attendance at AGM’s.

This is what happened when the call went out to Stop Adani Byron Shire to buy shares in Downer EDI, an Australian company that has had an agreement with Adani since 2014 to provide engineering and construction services for the building of the mine.

Within two weeks scores of Stop Adani folk, from all over the country, had chipped in whatever they could to buy $500 blocks of shares – the minimum amount required to enable attendance at the AGM in Sydney on 2 November 2017 and vote on a motion we had put before the board asking Downer to change its constitution to prevent it from taking on work that contributes to climate change. This request was to become an echo in the boardrooms of the wealthiest Australian companies in 2017, with lobbying, from organisations like Get Up and Australian Ethical Investment, in an effort to effect more accountability and environmental and economic sustainability.

Within that very short period of time the Stop Adani nationwide network ultimately raised over $100,000, with about 50 activists also attending the AGM in Sydney.  The motion was rejected by the Downer Board, but it put a chink in its armour and maybe sowed some seeds of doubt. 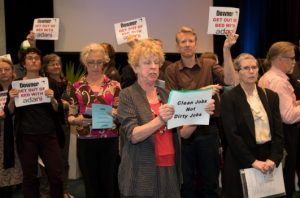 Then something else happened.  Like many other local councils in Victoria, Queensland and New South Wales, Byron Shire Council passed a Notice of Motion, after lobbying from the local Stop Adani group, not to contract any work from Downer EDI or its subsidiaries if they continued to be associated with Adani.

And, lo and behold, it really didn’t take very long after that for the plug to be pulled.  On 17 December 2017 Downer announced that it was parting company with Adani and had cancelled the $2.6 billion contract.

There is only one downside to this – Downer shares have gone down.

On the political side, Labor continues to flirt with opposing the mine with Bill Shorten stating in one interview that he will revoke Carmichael’s mining license if elected and then, in another, saying he’s not prepared to ‘tear up any contracts’.

In a poll this week 75% of voters in Malcolm Turnbull’s Sydney electorate of Wentworth now oppose the Adani mine – a result that has been repeated in polling all over the country, but he is standing firm on the Coalition’s support for the Adani mine. 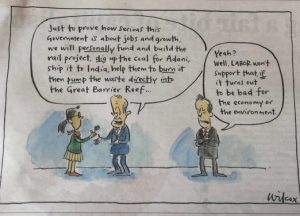 With grateful thanks to Cathy Wilcox with her finger on the pulse, as usual.

And now damn it, news in yesterday is that Gautum Adani is not poor any more, but apparently rich enough to fund the Carmichael mine himself?  He’s gone from being deeply in debt,  to his family company having $19 billion in the bank??  So it now seems that any hope of stopping this mine is going to have to be political.

What can we do?

We have to break the politics.  We have to get either Labor or the Coalition to commit to actually stopping the mine. .

Drastic action, coupled with strong political will is needed.  While politicians play snakes and ladders they continue to ignore the fact that we are at the coal face of climate change – 7 of the 10 hottest years ever recorded in Australia have occurred since 2005.

Failure to address the fact that climate change poses a material risk to the whole financial system, and that a transition to a low carbon economy is imperative,  is a catastrophic failure of imagination and courage from our political leaders.

That is why thousands people like me have decided to take matters into our own hands, because we are fed-up, frustrated and have run out of patience.

What can you do?  Join your local Stop Adani group and take heart that a caring community really does enhance optimism – believe me,  doing something is better than sitting at home and seething with frustration. Then, phone, write, sit, knit and defiantly be counted. 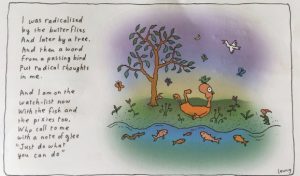 From my Leunig calendar – appropriately from March.