The Economics of Happiness 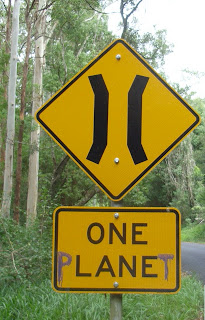 Last night I went to see the new film by award winning social activist Helena Norberg-Hodge called the Economics of Happiness. This film highlights the effects of globalization on communities and is a cry from the heart for ‘Keeping it Local’ to help restore and heal our planet and it’s people – and in my humble way, what this blog is all about.

The film’s message was clear and convincing, but I couldn’t help feeling frustrated that it was preaching to a hall full of the ‘converted’ and it’s message needs to be heard by, say, the board members of Woolworth’s (who have just foisted on our town an unwanted supermarket that will probably ring the death knell of our vibrant high street). But, the film was implying that the tide is turning and the real power lies with the individual and how we chose to spend our money – we just need to act.

So how do we heal our selves while healing our planet at the same time?
A long time ago, in a basic psychology class, I learned that there were three fundamental things that make and keep us happy:
1. Family/Heart connections (to love and be loved)
2. Work (having gainful employment whether paid/unpaid)
3. Community (being part of/connected to something bigger than ourselves). This has as much resonance for me today as it did then (at least too it is something I remembered from class!). It’s also the reason why growing your own food, volunteering, shopping at the farmers market etc. are ultimately much more satisfying than what we are told will make us happy – buying more stuff!
Growth is good.  Well, this is what we have been told by every neo-liberal economist since I was knee high to a grasshopper.  But I now know that this has only made the rich richer – about 3% of the folk own 82% of the world’s wealth and the consequence of this rampant quest for growth has been devastating destruction of our natural world, ill health and climatic catastrophes at the expense of the poor and dispossessed.
We need economic strategists and politicians to learn how to divide and subtract, instead of just being able to add and multiply before we are going to get anywhere near solving the global meltdown that faces us today. (Written in 2011 – we now have Trump!)
“The world has enough for everyone’s need, but not their greed” Gandhi

An interesting fact came up in this week’s broadcast of the Science Show on our ABC Radio National concerning food globalization. www.abc.net/rn/scienceshow “Where’s the Beef”?” About 20 years ago we were short of food, there was rather less food being produced all around the world than the number of people, so there really was genuine hunger through much of the world. But mostly through Chinese enterprise, farming became so much more efficient that for the last 10 years or so we have produced plenty of food, all the food that anybody in the world needs to eat.

It is shocking to think that the reason there have been famines is not because of a lack of food – far from it. An example: when they had the big Ethiopian famine in Eritrea, Ethiopia at the time was actually a net exporter of grain, if you can imagine that. It wasn’t a lack of food that has caused famines, it’s a lack of political goodwill that stops the food being distributed properly, that is what causes famines. ”  Robin Williams  ABC 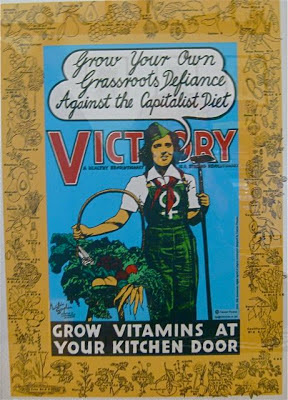 A good place to start is by getting out into the garden and growing as much of our own food as possible and buying from local, honest producers. The food we eat is only as good as the soil it is grown in and it’s something, as gardeners, that we do have control over – nurturing the earth and returning what we take – a carrot is not a carrot!  Even a handful of fresh herbs, grown in a container on a backyard deck, gives a deeply satisfying and nutritional boost to any meal, and I can guarantee that it will make you happy.

This is where real power lies and returns control to the individual – the economics of happiness.

NOTE: I first saw this marvelous poster by artist Frances Phoenix in the Queensland Art Gallery.  It’s from the 1970’s Sydney green/feminist movement and published by the now defunct Matilda Graphics. The plant/nutritional line drawings around the outside are exquisite.  Just about sums up my life’s work really.