Hippeastrums or ‘hippies’ to you! 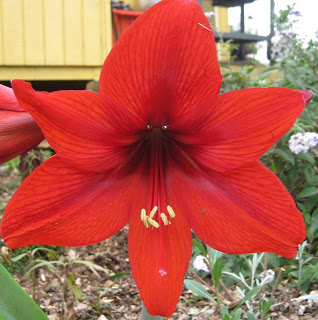 I want to officially nominate this plant Hippeastrum amaryllis as the floral emblem for our region – the name says it all (they are commonly known as ‘hippies’!)

Where I live has attracted varied groups of settlers over the years – many because of it’s natural resources; timber cutters, whalers, dairy farmers and banana growers – to name just a few., but it has also attracted folk seeking an alternative (better?) way of life – the hippies (counter culture conscious seekers or, as my father would say “dope smoking utopian layabouts”!)

The year 1973 was a momentous one for this region.  On the 1st of January 1973 Britain joined the European Union and, after decades of importing agricultural products from Australia – particularly cheeses and butter, it suddenly stopped.  This, in effect drove many dairy farmers out of business and suddenly made their land very cheap. 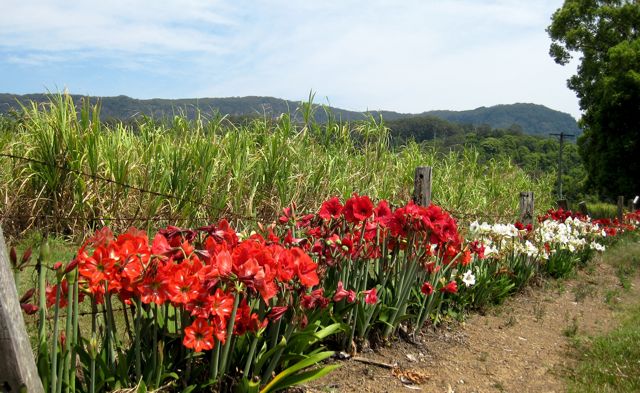 A fairly unique scene at Main Arm – Hippeastrums massed as a border in front of a sugar cane field, in front of the rain-forested ridge of Koonyum Range in the background.

Early in 1973 a group of University Union students approached the Nimbin Chamber of Commerce to hold a festival of music and discovery and the Aquarius Festival was born.  This was held in May, attracting an enormous amount of young people and many just stayed and stayed, buying up the cheap land that was now on offer and so the ‘Rainbow Region Counter Culture’ was born.

Remember that this was the time of the Vietnam War and its’ protest movements, the Cold War in Europe (which drove me away from it’s shores), the permissive society – and sex, drugs and rock and roll! 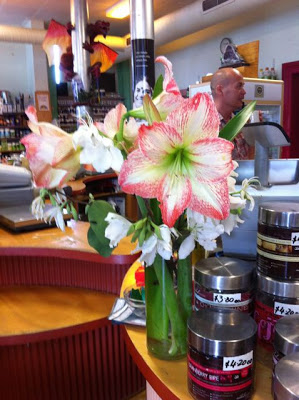 They’re everywhere at the moment – on the counter at Santos food shop.

It’s interesting to think that many of the ideals these original groups espoused have now become mainstream and I think we have a lot to thank them for – environmental responsibility, composting and recycling, alternative power, peace movements, political conscious raising, local and sustainable food production, wilderness protection and land regeneration.

Hippeastrum amaryllis is one of those bright and sunny plants that herald summer.  A native of tropical South America and the Caribbean – with a common name of Barbados Lily – their stripes and unusual markings are a result of crossing between the 75 different species. ( If you have red one and a white one you can bet your life that you eventually will have a striped one). 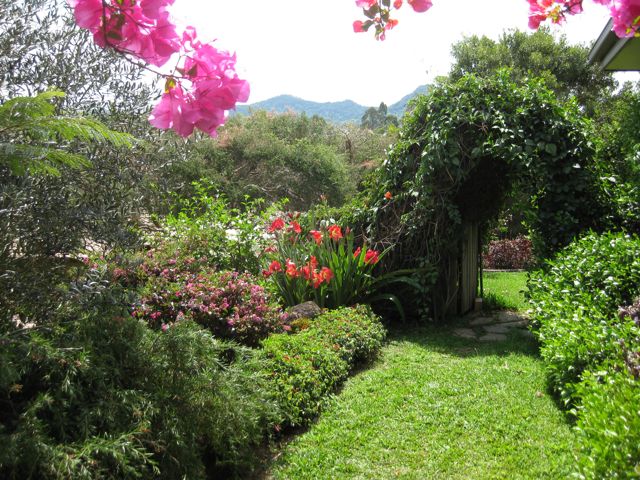 Used with great joy in my neighbour’s garden – they’re just asking you to walk up the path and through the arch into the rest of the garden.

I think they are best used like this – massed as a focal point, where the summer garden will then take over when the flowers die down.  Perfect for under a frangipani tree too!  They need to be seen, so don’t bury them at the back of a bed.

They grow from a bulb, are incredibly tolerant of all kinds of soil conditions – including the weeks of dry weather that we are experiencing – and the very wet soil that we also get!  They just don’t like cold and won’t tolerate frost.  Apart from that they are pretty trouble free.

NOTE:  I was recently listening to a radio program that interviewed some of the original commune members from the Aquarius era and one of them, who has since moved away, said his legacy from that time was “to always have more in his pantry than in the fridge”.  Well, I reckon then that my dear old Mum must be a hippie at heart because, when I was growing up, our pantry was always full – and often with hippeastrums.  In the UK they are invariably grown as a pot plant and my mother would spend the winter scouring Dutch bulb catalogues and ordering all kinds of exotic varieties.  Once potted up they would spend time in the pantry until their shoots emerged from the soil.  We then got a daily running commentary of the ‘hippies’ progress until glorious bloom time – oh joy! (It was too cold in my part of the world to grow them outside)