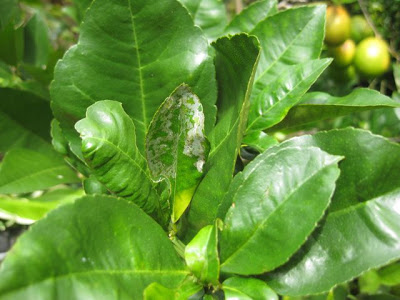 Scale (of all colours, shapes and sizes) leaf miner, aphids – and mealy bug, for that matter – are all known as SAPSUCKERS – because that is what they do – suck sap!  They are a common pest of citrus but there are simple remedies for controlling them that don’t involve nasty chemicals – but more of that later – first things first.

As I stated before, on the previous post about citrus and caterpillars – your CITRUS WILL STAY HEALTHY IF THEY ARE KEPT HEALTHY!  They are heavy feeders and require regular, adequate amounts of water.  Go to that previous post for the full story on feeding citrus.

The next part of this story is about the ingeniousness of nature that makes you smile and mutter “clever critters”!

Before you notice scale damage on your citrus you will probably first notice ANTS, crawling up and down the stem, and maybe a BLACK SOOTY MOULD on the leaves and fruit. 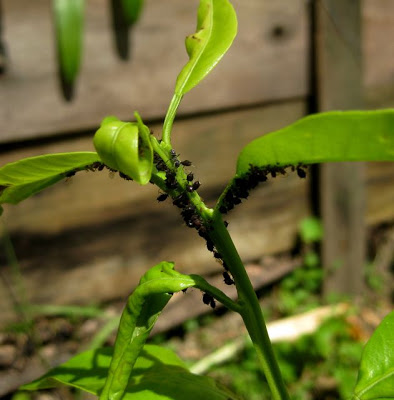 The ANTS come first.  What they want is the sweet excretions from the sapsuckers – known as HONEYDEW.  So, they pick up and take baby sapsuckers from tree to tree so they can have some tucker.  If you think about it – scale can’t fly, so how do they get from one plant to another – well the ants do it for them.  The sap suckers then multiply and cause the damage – withering and curling of new leaves, distortion of fruit and die-back in new stems. 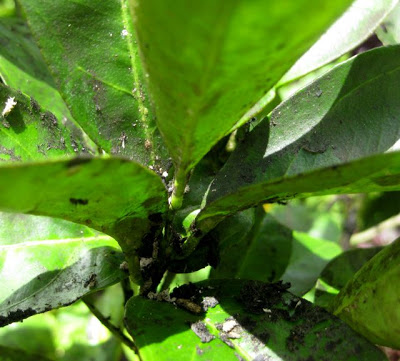 Scale and sooty mould on citrus

After the ants, sapsuckers and honeydew comes SOOTY MOULD.  This is a fungal spore that lives in the air and also lives off honeydew.  So these three – ants, sap suckers and sooty mould live in a symbiotic relationship – each reliant on the other.  Clever isn’t it. 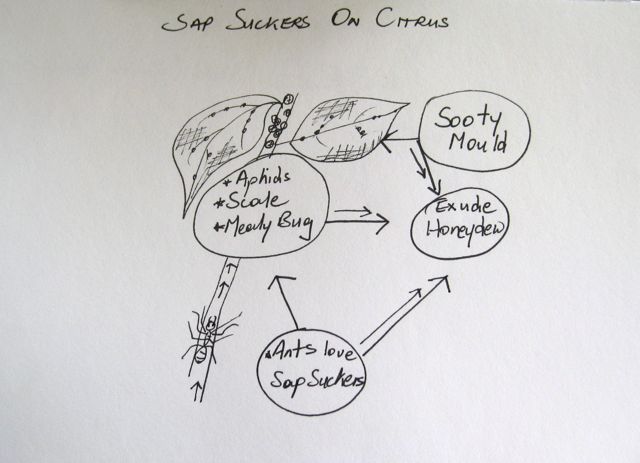 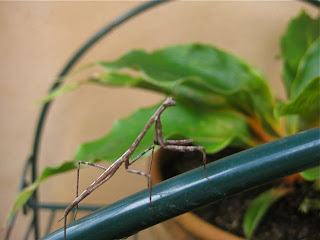 Before you reach for the spray bottle think about the creatures out there that want to feed on these unwanted ones and try to encourage them first.  I’m talking about birds, lizards, ladybirds, lacewings, hoverflies, some wasps and these large, amazing insects – the mantids.  After all, as my friend Mary would say – it’s just a big restaurant out there!  We have to try and get away from the ‘creepy crawly’ and ‘enemy’ attitudes to most creatures in the garden and realise that most of them are, in fact our friends. (Look at this previous post on design tips and how to encourage beneficial creatures in your garden)
In the meantime, here is a simple and effective remedy for controlling sap sucking insects, like scale, and for getting rid of sooty mould – the oil in the mix smothers them as they actually breathe through their exoskeleton (outer covering).  Don’t be tempted to buy ‘white oil’ in an aerosol can – aerosol cans are non-recyclable and the oil base of the mix is often petroleum – total overkill.  Use sparingly as you may, unwittingly, be killing the beneficial insects too.

Homemade oil spray for control of scale and other sap suckers

3 tbs cheap cooking oil (you don’t need extra virgin for this!!)
4 drops washing-up detergent (acts as surfactant to mix oil with water)
1 litre warm water
Shake up and use when cool.  Do not use in heat of day in direct sunlight – leaves will cook!!  Needs a good shake every time you use it.
NOTE: What to do if you notice sooty mould in large trees and ants going up and down.  In this case it’s probably not practical to spray the tree.  Controlling the ants is the key by placing a band of double-sided sticky tape around the tree and covering it in something tacky.  You can buy commercial insect barriers for this (Green Harvest – ‘Tanglefoot’ Insect Barrier).  In the old days they would use Vaseline or old engine oil.  Some farmers made the mistake of applying this directly to the tree only to find that they had effectively ‘ringbarked’ them! 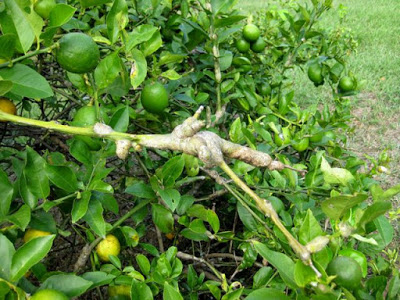 WASP GALL DAMAGE:  You may notice these swollen lumps on citrus branches – make sure you prune these and destroy them.  This is the damage that the burrowing wasp gall makes – if left, they will weaken the tree and eventually destroy it. 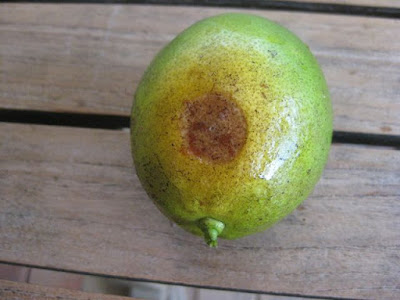 FRUIT FLY: A common pest of citrus.  These tiny flies lay their eggs in small groups just beneath the skin of the fruit where  the larvae hatch. Their feeding, and a rotting organism that is introduced when the eggs are deposited, quickly spoils the fruit.  Difficult to control once they have taken a hold – the trick is to get them early in the season by putting baits near plants that are prone to their damage.  Go to this link for effective home-made fruit fly baits. 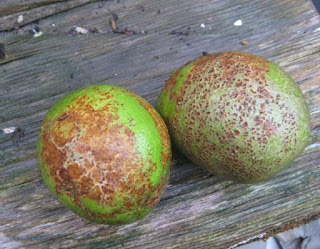 CITRUS RUST MITE: This looks like bronzing on the fruit and is often mistaken for a nutrient deficiency whereas, in fact,  it is caused by a tiny mite  This is not to be confused with a small amount of brown markings to the fruit and leaves caused by storm and wind damage. CONTROL: Once this has taken a hold it is very difficult to control.  Infestation by this rust mite is indicative that the tree is under stress – lack of water, good soil and nutrients.  Mites very quickly develop resistance to pesticides so there is not point in reaching for the spray gun.  My advice is to destroy all the affected fruit, give it a hard prune and feed and mulch it. 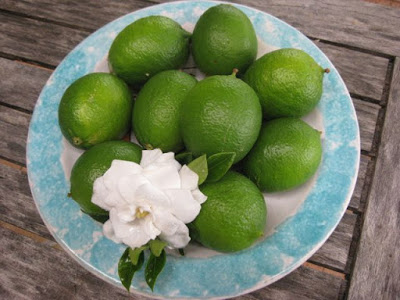 Healthy limes from a healthy tree!

NOTE:  By following these few simple guidelines a lot of the common problems citrus growers have will not occur – i.e better fruiting and less pests and diseases.

Here are some useful links to more citrus topics.  For all of those fabulous ways to cook with citrus – from marmalade, curds, tarts, cakes and pickles – go to the RECIPE list at the top of the page and click on the link.