The cook, the gardener, the king and his mother – sex and the papaya 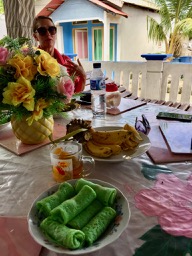 Janet de Neefe (from Casa Luna Cooking School in Ubud, Bali) – our dear leader on this Food as Medicine cruise around the Spice Islands of Indonesia on the Kurabesi Explorer.

East of everything.  You can’t get much further ‘away’ than where we were in this photo: sitting in the Manhattan 2 Guest House of the self styled ‘king’ of Run (he was also a tour guide and headmaster of the local school), sipping spiced tea and eating an Indonesian speciality dadar gulang – pandan flavoured coconut and palm sugar pancakes, made by his mother,  which, I have to say, I am addicted to.

Why had we come to this emerald speck of a Moluccan Island in the Banda Sea?  Well, it was here that globilization started with the discovery of cloves, nutmeg and mace – world trade on a massive and lucrative scale that, up until the fifteenth century, had  been controlled by Arab and Chinese seafarers who temptingly introduced to the west these exotic condiments with a myriad of proclaimed uses; the preservation and flavouring of food, protection from the plague, hallucinogenic properties and libidinal boost – amongst others.  These spices then were more valuable then than gold and would bring untold wealth to any country that could control their trade.

There was one serious problem  – getting here. So many lives were lost and dreams shattered in the race for the control of the Spice Islands – and here we were, where it all began. These days it is still hard to get to and largely forgotten, rarely appearing on any maps,  with no electricity, just a couple of motorbikes and only basic medical services,  Run’s importance in world history seems just a distant memory. 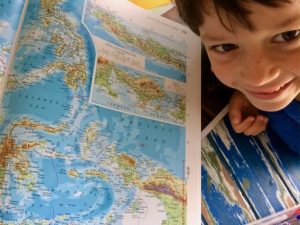 Where are you Nanma?  I can’t find Run on the map? (From my grandson, Taj)

Nutmeg, cloves and mace, are indigenous to these few Banda Islands,  Initially controlled by the Portuguese in the sixteenth century (hence the conversion of many of the Islanders to Christianity) then the brutal takeover and control by the Dutch in the seventeenth and eighteenth centuries – the Dutch East Indies Company was born here.  But, here on Run, was a tiny and lucrative outpost of the British Empire – doggedly holding out against the Dutch until finally capitulating and swapping Run with the Dutch for the swampy and, at the time, worthless island of Manhattan – hence the name of the guest house where we were taking tea. 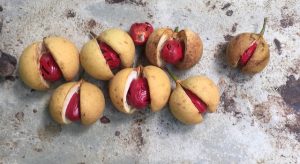 The nutmeg fruit ‘like an open door’ revealing the bright red aril, that is mace, covering the spice seed.

The incredible riches that these spices brought only ended when the mystery about their medicinal properties was debunked and the monopoly on Dutch trade broken by the British, who smuggled out seedlings of nutmegs and cloves to their colonies in Sri Lanka, Malaya and the Caribbean  (the flag of Grenada now has a nutmeg on it). 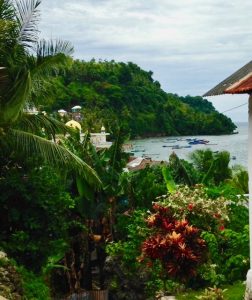 The forgotten Indonesian Island of RUN, that was swapped for MANHATTAN when NUTMEG was more valuable than gold.

But Janet and I weren’t talking about nutmeg as we sipped our tea and ate our way through plate after plate of fragrantly spiced sweetmeats. We were talking about the sex lives of plants – particularly the papaya.

Janet “I need to buy a big bag of papaya flowers when we get back to Ambon, so I can take them back to Bali and make that delicious salad we have been eating here”

Janet “No I have never seen them”

The King of Run

DH “Well they use the flowers from the male tree here because they are more prolific flowerers than the females – look at those two papayas in next doors’ garden – they are full of flowers.  In Bali I suspect they pull the males out because they are really superfluous – a bit like us Ibu – you only need one male to fertilizer an acre of females.  But here, because they make traditional food from them, they leave them in and let them grow and harvest them for their flowers. Let’s check with the king?”  “Apakah itu papaya laki-laki”  (is that papaya a boy). He nodded in the affirmative.

Janet “Do all trees have separate male and female plants”

Janet “How fascinating!.  How can you tell a female papaya tree from a male “

DH ” The female has larger and sweeter smelling flowers that are clustered on the trunk just below the leaves. Each has a swollen base containing the ovum (egg) with a tube reaching out from the petals – a kind of floral vagina (the stigma) – waiting for an insect to land with pollen (sperm from the male flower)  on top of the tube that travels down to fertilize the egg at the base.  That fertilized ovum becomes the fruit. 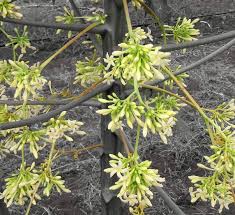 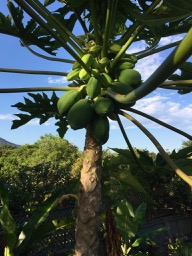 Female papya with flowers below the leaves that then fruit

Janet “So the flowers come first and then the fruit?”

DH “That’s right.  But there’s one more interesting thing about the sex lives of papayas.  In certain seasons. in certain weather,  the male becomes hermaphroditic and may produce fruit that, I have to say, look a lot like testicles”  And who said gardening was boring? 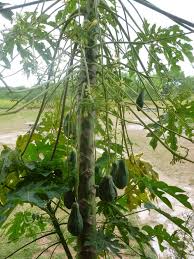 DH  “And its not only the sex life of the papaya that is interesting.  The nutmeg Myristica fragrans is also dioecious.  These days the growers make more money from selling advanced, rooted seedlings for  plantations in Papua than from the dried seed.  On our walk in the nutmeg forest this morning I asked our guide how he could tell apart the young male and female trees of similar age – because they want the females that produce the fruit and not the males.  His reply” Oh, Ibu, he said with a smile, it’s just like us – girls reach puberty before boys – girl trees besar (big), boy trees kecil (small)”

Janet “Food for thought Ibu, let’s have another pancake?” 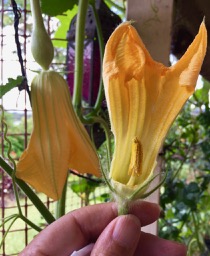 My conversation with Janet, about the fascinating sex life of plants, was uppermost in my mind as I set about one of my first garden tasks when I got home;  hand fertilizing my climbing, trombone zucchini, i.e. sticking the male, with the pollen on its pistil, into the female.  It had been raining heavily while we were away – which usually means a temporary scarcity of pollinators, they sensibly stay home, – so I was just giving them a helping hand and letting my mind run to Run.

There will be a test in two weeks!