April Food Garden – What to Plant

Are you ready for the most productive time of the year in the vegetable garden?  The cooler months in the sub-tropics – April-October – will see your garden spring to life after the heat and humidity of summer.  Below is a complete list of what to plant now, with a focus on a few crops I planted this week – tomatoes, potatoes and salad leaves. 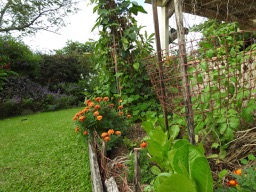 WHAT IS GROWING IN MY AUTUMN GARDEN? This is my warm winter bed that faces north-west – perfect for tomatoes and fruiting crops like peas.  I have over 50 food plants scattered around the garden – this is just one of the beds.  Even if I don’t have time for the rest of the garden I keep this one going in the winter so I always have something to eat.

HOW TO PREPARE THE SOIL for AUTUMN PLANTING?

The heavy rains of summer deplete the soil of the good stuff – the nutrients simply wash away; which often leaves the soil quite acidic.  SO FEED IT!!.  With whatever you can lay your hands on:  COMPOST, MANURE (well rotted), BLOOD AND BONE, SEAWEED, GRASS CLIPPINGS (composted), ORGANIC CHICKEN PELLETS.  And then MULCH, MULCH, MULCH.

TOP TIP: It’s also a good idea to give a top dressing of lime/dolomite in the autumn as the alkaline elements in the soil get washed away in the summer rains leaving the soil acid.  When in doubt,  DO A pH TEST so any soil imbalances can be corrected.

MULCH  I use baled straw as mulch – its economical; breaks down into beautiful compost; is easy for me to move around on a trolley and acts as a great weed suppressant while keeping the soil warm through the cold months – it also stops the soil from drying out

TOMATOES don’t like the intense heat of summer – they prefer about 24oC daytime temperature (cooler) AND they don’t like extreme humidity – preferring around 70%.  I had to relearn this, coming from Sydney, because they are a summer crop down south.  Now I’ve got it sorted and have wonderfully abundant crops for eight months of the year. 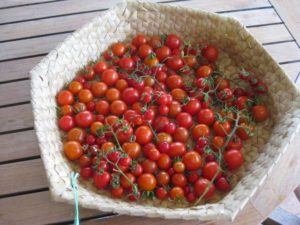 WHICH VARIETIES TO PLANT?

Local seeds will do much better than anything you can buy from the shops.  WHY – because they are adapted to the local conditions and have proven themselves to be successful. Also, many of the seedlings now being sold in the shops have been genetically engineered in many undesirable ways.  The most insidious,  to stop people like us from perpetuating them in the time honoured way, are called suicide plants – they have been doctored to stop their seeds germinating.  How this has ever been allowed by any government defies all logic, but what it has done is render seed savers, like me, to be labelled subversive activists in some political lobbyists eyes.  Bonkers, but true – sorry, where was I?  Let’s plant some tomatoes.

The above picture is a tray of what I call my compost specials from seeds that have come up out of the compost, season after season – they are hardy, prolific and actually taste like tomatoes.  I also have great success with Black Russian and Roma– grown from seed from tomatoes bought at the local Farmer’s Market.

TOP TIP:  Don’t plant tomatoes in the same place twice.  This helps to prevent the spread of diseases.  Tomatoes are particularly prone to various water borne soil diseases like fusarium wilt, which starts with a yellowing and blotching of the lower leaves that quickly creeps all over the plant and kills it.  Maintaining a balanced pH of around 6.6-6.8 also helps, as does  – yes you guessed it – MULCHING.

When I harvested my first crop of potatoes in our family allotment, a zillion years ago, I knew I was destined to be a gardener.  From the one potato I had planted three months before, I now had a bucketful.  It was like Aladdin’s Cave – a bucketful of edible jewels.

GROW POTATOES ONCE AND YOU WILL BE HOOKED!!  There is an added bonus to growing potatoes in the sub-tropics – they only take about eight weeks from shooting to harvest so you can get about three crops in one season.

HOW TO PLANT POTATOES  You will need chitted potatoes – these are ones that have sprouted; the ones that you forgot about in the pantry that decided that they were quite happy to grow right there anyway. (Many potatoes have now been genetically modified also to prevent them  from sprouting so I can’t do this!).↓ 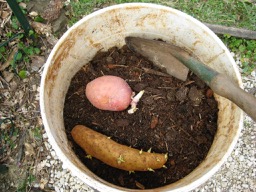 “Chitted’ potatoes – I have KIPFLERS and PONTIACS here.  You can buy seed potatoes (Mullum Farm Co-op), but they still have to be sprouting before you can plant them. 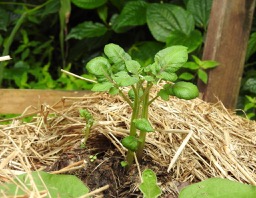 Potatoes sprouting about one week after planting – snug in their straw and compost bed.

DON’T HAVE TIME, DON’T HAVE SPACE FOR FOOD GARDENING but DON’T LIKE THROWING AWAY HALF THE LETTUCE (and the packaging)? – THEN GROW A BOX OF SALAD LEAVES!!  This will save you time and money as well as being super nutritious AND convenient. 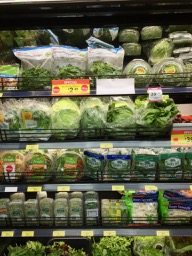 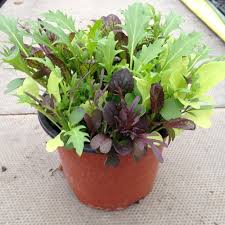 WHAT YOU WILL NEED

TOP TIP.  Don’t use a potting mix that is too COARSE.  Seeds like to be snug in their seed bed – with the soil grains roughly the same size as the seeds you are planting otherwise they will have too many air pockets around them and they wont germinate.  TOP OFF your containers with a SEED RAISING MIX or SIEVE some soil as the top layer – this will be nice and fine and you will have a better success rate. 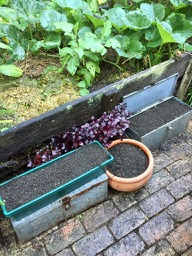 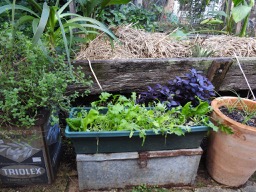 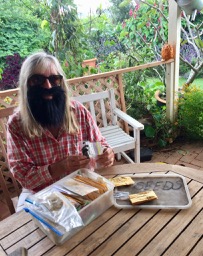 Taking precautions in case ASIO is watching!  The practice of genetically modifying crops, to make them sterile, I think is truly evil – denying the very heart of our existence on earth.  As usual, this will impact on the most vulnerable – the poor – by denying them the most basic of fundamental human rights – the ability to feed themselves.  (Michael’s comment, when I asked him to take a photo of his wife doing some seed sorting wearing a false beard “Is this for Costa’s Fan Club?”)